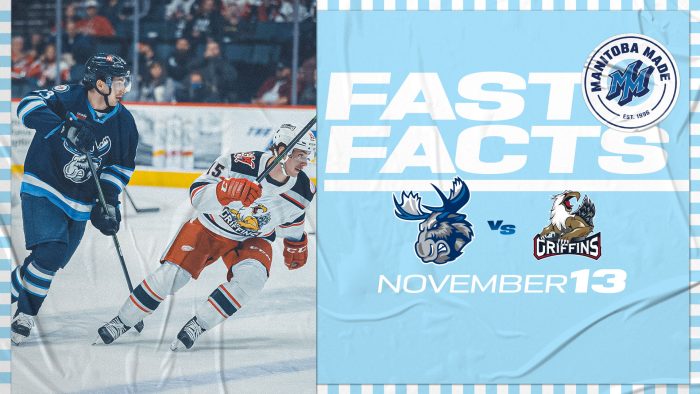 The Moose close out a six-game road swing tonight against the Grand Rapids Griffins. It’s a rematch of last night’s tilt that saw Grand Rapids earn a 2-0 shutout victory on the back of 34 saves from Calvin Pickard. Catch the rematch on CJOB.com/sports, MooseHockey.com/LISTENLIVE and AHLTV.com with coverage starting at 5:45 p.m. CT.

Running Up the Shot Count

The Moose are a team full of players who absolutely love to fire the puck. Entering tonight‘s contest, the Moose have recorded 30 or more shots in all of their games this season, 12 straight contests. That mark was punctuated by Manitoba firing an incredible 60 shots on goal in 64:22 of play-time in a Wednesday night overtime thriller in Milwaukee. The shooting streak began on Oct. 16 against the Toronto Marlies. The Moose have outshot their opposition in six consecutive contests and have been outshot just once this season (Iowa – Oct. 30).

Home For a Rest

The Moose have been on the road since last Thursday, Nov 4. Their current six-game road swing brought them to Milwaukee, Chicago, Rockford, Milwaukee again and finally to Grand Rapids for the final two games. The Moose will surely look forward to some home cooking and return to Manitoba for five straight games where they welcome the Texas Stars and the aforementioned Admirals. This current six-game road trip is the second-longest journey of the season for Manitoba. The club will contend with a seven game marathon from March 15-26.

Locked in at Shutting Down

The Moose penalty kill has been outstanding five games into a six-game road swing. Through the first five contests, the Moose have allowed just one power play goal while killing off 16/17 opportunities against. That’s a 94.1 percent success rate for the penalty killers. The PK also added a shorthanded goal on Nov. 6 in Chicago. Over the course of the season, the Moose have killed off 88 percent of the penalties they’ve take on the road. Overall, Manitoba ranks fifth in the AHL with an 86.5 percent kill rate.

Forward Austin Poganski has three assists through five games in the month of November. The Minnesota native notched five points (1G, 4A) in 11 games this season with the Moose. It’s his first season in antlers and the forward spent past of last season in the NHL with the St. Louis Blues. He appeared in five contests with the NHL club.