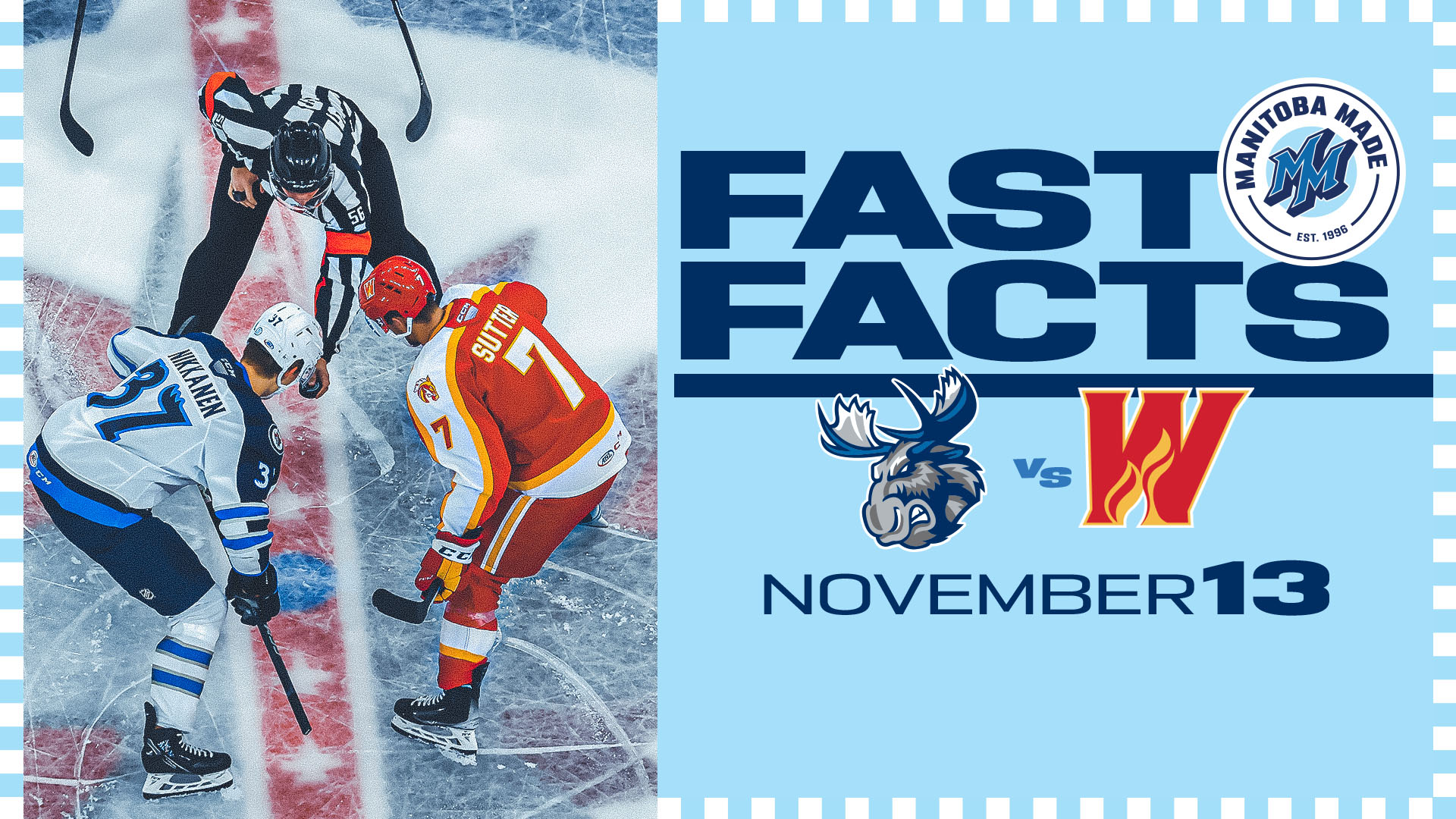 The Manitoba Moose put the wraps on a six-game home stand this afternoon when they host the Calgary Wranglers in a 12 p.m. matchup. Calgary snagged the first meeting between the clubs on Friday by virtue of a 3-2 victory. The Moose have yet to lose consecutive games on the campaign and try to keep that run going and earn the weekend split.

Today is the Hockey Fights Cancer Game in support of Camp Quality Manitoba. The team wears its first specialty jersey of the 2022-23 campaign today. A selection of jerseys will be available for auction on the concourse. The rest will be auctioned online in the coming days. Tickets for today’s 12 p.m. game are available at MooseHockey.com/TICKETS.

Ville Heinola notched a third period assist in Manitoba’s loss against Calgary on Friday evening. The defenceman, who was drafted by Winnipeg in the first round in 2019, has recorded five assists in 10 contests this season leads the antlered ones with a plus-nine rating. Weekend contests have treated Heinola well, with the defenceman tallying three primary assists and a plus-seven rating in four Sunday games. Over his AHL career, the Honkajoki, Finland native has put together 43 points (9G, 34A) over the course of 73 games played all with Manitoba.

Friday’s contest saw Jeff Malott and Evan Polei score 25 seconds apart in a losing cause. It was the fifth game in which the Moose scored goals less than two minutes apart. On Oct. 15 the Moose scored two goals in 1:47. The following day the club struck twice in 1:50. Manitoba’s most explosive outburst came in Rockford on
Oct. 23 when the Moose scored three times in a span of 2:28. The team’s fastest strikes came in two of its past four games, scoring goals 15 seconds apart on Oct. 30 against Iowa and, of course, Friday’s goals 25 seconds apart. Manitoba holds a 3-1-1-0 record when scoring goals less than two minutes apart.

Leon Gawanke put an assist on the board in Friday’s contest against the Wranglers. The defenceman’s assist broke a two-game pointless streak and gives Gawanke five points (2G, 3A) in 10 contests to go along with a plus-three rating. A 2017 fifth round pick of the Winnipeg Jets, Gawanke has tallied at least one game-winning goal in three of his four seasons in antlers. The defenceman put together a strong 2021-22 season and accumulated 36 points (10G, 26A) in 65 games. The Berlin, Germany native has also recorded at least one shot in every game this season and sits second on the squad with 25 behind only Mikey Eyssimont’s 33.

Alex Limoges continued his point streak with a third period assist in Friday nights loss against Calgary. The forward, who was tallied three points (2G, 1A) his past two games, is now one point off the team lead. Limoges, who is in his first season in antlers, has recorded eight points (2G, 6A) in seven games and sits with a plus-six rating and one game-winner this year.