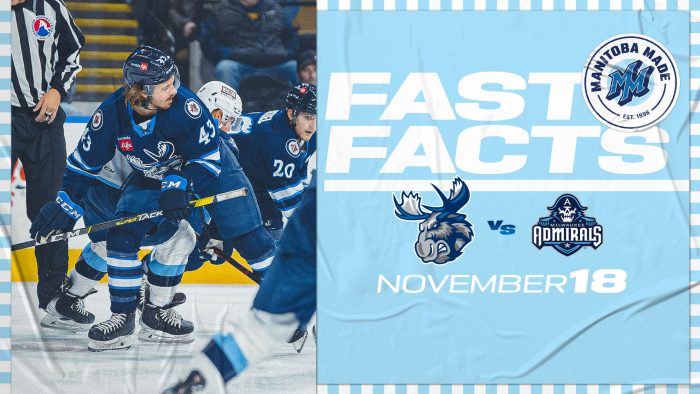 The Manitoba Moose return to Canada Life Centre for the first time since Oct. 31 when they host the Milwaukee Admirals tonight. The Moose posted a 3-2-1-0 record on a six-game road swing through the Central Division. That included an overtime win and loss in Milwaukee as the teams prepare to face off again. Tickets for tonight’s game are available at MooseHockey.com/TICKETS.

That’s It! Back to Winnipeg!

This past Saturday the Moose finished up a  six-game road swing that brought them to Milwaukee, Chicago, Rockford, Milwaukee again and finally to Grand Rapids for the final two games. Manitoba finished the trip with a record of 3-2-1-0 and had some exclamation wins against Chicago and Grand Rapids to the tune of 5-1 and 6-2 respectively. The team returns home to Canada Life Centre for five straight games. Home cooking has treated the  Moose well and the franchise is 3-1-0-0 to begin the season in front of their loyal fans, including a three-game win streak to open their home schedule.

The Moose have been a tear with their overall penalty kill through the first 13 games of the season. The team has been short handed a total of 41 times in the early going and has only surrendered five power play goals in that span. That mark is good for an 87.8 percent penalty kill rate which currently ranks the team third overall in the entire AHL. The team also has one shorthanded tally over that span off the stick of Cole Maier. The Moose penalty kill surrendered just one goal over the six-game road trip, turning aside 20 of 21 power play opportunities against, a 95.2 percent success rate.

The Moose boast a plethora of Winnipeg Jets draft picks along their blueline this season. They recently added another to the list as defenceman Dylan Samberg returns from injury. It is the Minnesota native’s second season with the club after he put up seven points
(1G, 6A) in 32 games during the 2021-22 campaign. He also tacked on 15 penalty minutes and a plus-four rating. Samberg will join a group on the blueline that features seven Jets draft picks, with four coming in the first three rounds: Heinola (1st), Lundmark (2nd), Samberg (2nd), Kovacevic (3rd).

The Moose feature a bevy of players that have made significant contributions early on in the season.  One of those skaters is defenceman Jimmy Oligny. Over his AHL career, which has spanned  394 games, Oligny previously hit a career high of four goals which came in 2019-20 with the Moose. The defender is already up to two goals and four points in 13 games. Oligny also finds himself 11th in team scoring and fourth in terms of points by a defenceman. He is one of 27 defencemen with multiple goals on the season.

Forward C.J. Suess checked in with a goal and an assist in Manitoba’s 6-2 win over Grand Rapids on Saturday. The Minnesota native is up to four points (1G, 3A) in 11 games. The forward is in his fourth season with the Moose and has  59 total points (32G, 27A) in 131 AHL games all with the Moose. Suess was drafted in the fifth round in 2014 by the Winnipeg Jets.