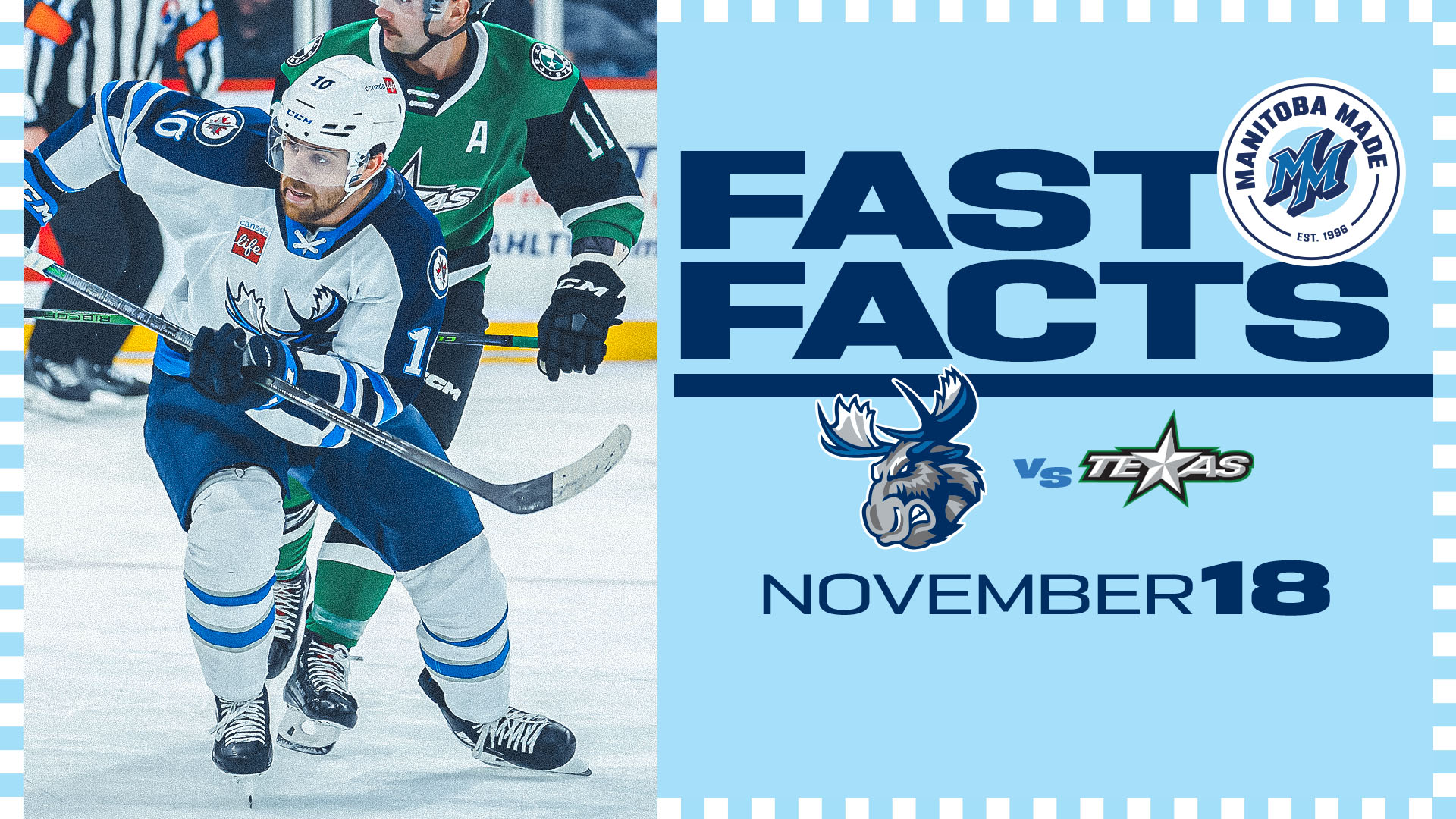 The Manitoba Moose open a five-game road swing through the Central Division tonight against the Texas Stars. It’s the teams third meeting of the season after facing off in a pair of contests in Winnipeg on November 4 and 6. The clubs split the two-game set, with the Moose winning 2-1 in overtime on Nov. 6. Coverage of tonight’s clash between the northern-most and southern-most located teams in the division gets going at 6:45 p.m. CT on cjob.com/sports, the Winnipeg Jets App and AHLTV.

Arvid Holm was called upon by the Moose to join Sunday’s contest after beginning the game on the bench. The goaltender, a 2017 sixth round pick of the Winnipeg Jets, stopped all 24 shots he faced. The Ljungby, Sweden product previously made a relief appearance on Feb. 27/22 against the Chicago Wolves and backstopped Manitoba to a 4-3 shootout win. Coincidentally, he turned aside 24 shots in that contest as well. Holm has a record of 3-1-1 this season to go along with a 2.75 goals-against average and a .924 save percentage.

Henri Nikkanen tallied a goal in the middle stanza of Sunday’s win over Calgary. The 2019 fourth round pick of the Winnipeg Jets, has five points (3G, 2A) through 10 games to go along with a plus-three rating. Nikkanen’s goal on Sunday snapped a four-game pointless streak and pushed him to the top of the Moose rookie scoring list. The Mikkeli, Finland product recorded his first AHL point against Rockford on
Oct. 15/22 before potting his first goal six days later against the Wolves in Chicago.

The Moose are 11 games into the 2022-23 season and stand with a record of 7-3-1-0. Manitoba has spent the majority of the campaign at home at Canada Life Centre, where the squad has a record of 4-3-1-0. Out of their 11 games on the season, the Moose have only been on the road for three. That quick trip saw the Moose play their only three-in-three of the season when they journeyed to Chicago, Milwaukee and Rockford. The Moose not only won all three contests, they outscored their opponents by a combined mark of 16-7 and won each game in regulation. Manitoba now embarks on a five-game road swing that will see them face the Texas Stars, Milwaukee Admirals and Grand Rapids Griffins. The trip represents Manitoba’s third longest trip of the season.

Through the 2022-23 season, the Moose have scored 39 total goals while allowing 29 against. Breaking down those 39 goals a step further, the Moose have scored eight in the first period, 15 in the middle frame and 14 in the third stanza. They’ve also added a pair of overtime winners to that total. Leading the way in second period scoring is Jansen Harkins. The  forward, who is currently on recall with Winnipeg, leads the Moose with five points (2G, 3A) in the second frame. Harkins is trailed by Mikey Eyssimont, also on recall with Winnipeg, who has four assists and by Chaz Lucius, who has registered all of his four points (2G, 2A) on the season in the second frame.

The Winnipeg Jets recalled defenceman Ville Heinola from the Moose on Nov. 17. Heinola posted seven assists with Manitoba to sit tied for the team’s defensive scoring lead. Heinola also paces the Moose with a plus-12 rating. Heinola has 45 points (9G, 36A) in 74 AHL contests, all with the Moose, in his career. The defender has appeared in 25 NHL games with the Jets, tallying 10 points (1G, 9A).

The Moose recalled three players from the  ECHL’s Newfoundland Growlers on Nov. 16 and 17. First, Manitoba recalled forwards Tyler Boland and Isaac Johnson. The duo ranked second and fourth respectively in ECHL scoring at the time of their recalls. Boland’s nine goals tied him for the circuit’s goal-scoring lead and Johnson was the Player of the Month for October. The Moose also recalled defenceman Simon Kubicek who posted five points (2G, 3A) in 11 games.

Leon Gawanke scored the overtime-winning goal in Manitoba’s Sunday victory. The tally was his third of the season and gives the Berlin, Germany native six points (3G, 3A) in 11 games  to go along with a plus-three rating. The game-winning tally was Gawanke’s second of the season and ties him for first on the squad. It was also his third career overtime marker.