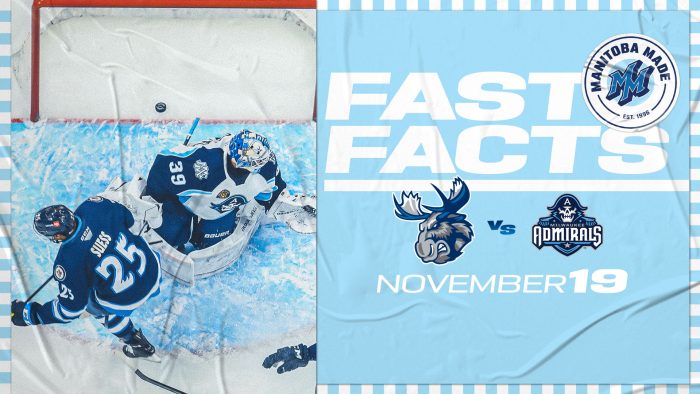 The Moose opened their home stand with an impressive 6-2 win against Milwaukee last night. The two teams are back at it again tonight at Canada Life Centre in a game slated for 7 p.m. The Moose have 12 goals in their past two games and hold a 4-1-0-0 record on home ice this season. To see if they can keep it rolling in person, visit MooseHockey.com/TICKETS to get your seat for tonight’s game.

Back on the Board

Cole Perfetti burst back onto the scoresheet after being held off for three consecutive games. Perfetti racked up three points (1G, 2A) in last night’s win against the Admirals. It marked the third time in Perfetti’s career the young forward tallied three points in a contest after hitting the mark twice in a span of three games during the 2020-21 season. It’s also the sixth multi-point game of Perfetti’s professional career. The Whitby, Ont. product also matched his career high with a plus-three rating in the win. Perfetti has nine points (4G, 5A) on the season while recording 33 shots on goal in 11 games.

All Swedish, Plenty of Finish

David Gustafsson has been an absolute force for the Moose to begin the season. The forward leads the team in scoring with 12 points
(5G, 7A) in 14 games and in the Thursday win over Milwaukee, tallied his first multi-goal game in the AHL. The forward had his first multi-assist game on Feb. 29/20 against Chicago and his first four-point game earlier this season on Oct. 20/21 against the Toronto Marlies. The Tingsryd, Sweden product owns 11 multi-point games over the course of his 49 games in the AHL. Gustafsson’s first tally of the game came on the power play, the Winnipeg Jets 2018 second round pick has three power play goals this season which ties him for seventh in the AHL.

When the Moose are on their game, they have the ability to score goals in bunches. The last pair of games, against the Grand Rapids Griffins and Milwaukee Admirals respectively have produced 12 goals for the Moose. Manitoba is receiving contributions from all over their lineup, as evidenced by six different scorers in the win over Grand Rapids and five different scorers in last night’s win. The Moose currently have 45 goals over their first 14 games. That mark ranks them first overall in the AHL’s Central Division.

The Moose are out to a 4-1-0-0 record through the first five games of their home schedule. While on home ice, the Moose have outscored their opposition by a 16-11 mark. The club has a 16.7 percent success rate on the power play while killing off 87.5 percent of penalties taken. Cole Perfetti leads the Moose with six points (3G, 3A) at Canada Life Centre. The last time the Moose opened the season with a 4-1-0-0 mark was during the 2018-19 season. Manitoba went on to post a 25-11-1-1 record in Winnipeg that season, matching the franchise record for wins on home ice.

Defenceman Declan Chisholm checked in with two assists in Manitoba’s 6-2 win over Milwaukee on Thursday. The Bowmanville, Ont. native is up to six points (6A) in 14 games. The defenceman is in his second season with the Moose and has 17 total points (2G, 15A) in 41 AHL games. Chisholm was a fifth round pick of the Winnipeg Jets in the 2018 NHL Draft.