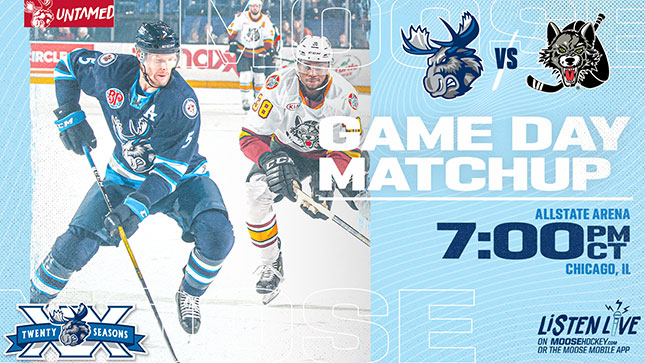 After snapping out of their losing skid, the Moose try for two wins in a row tonight when they visit the Chicago Wolves. Manitoba scored a 4-2 win over the Grand Rapids Griffins last night that took on a familiar cast. After falling behind 4-0 in two of their last three games, it was the Moose jumping out to a four-goal edge last night. Three second period goals powered the win over their division rival.

C.J. Suess opened the scoring in the first frame. He was followed by Johnathan Kovacevic, Andrei Chibisov and… himself in the second period. Griffen Outhouse took care of the rest, making 26 saves on 28 shots for the win. Outhouse made his first AHL start and impressed in the outing. His biggest save came on a two-on-one that saw the rookie pro lunge across to make a glove stop. Outhouse’s performance earned him the game’s second star and provided a rare night off for Mikhail Berdin.

“It was awesome, it was a ton of fun,” said Outhouse following the win. “I thought the guys played really good in front of me and that gave me a lot of confidence going in and during the game. I was just thankful we were able to come out with the ‘W’.”

Suess’ pair of goals last night gives him five on the season. That places him fourth on the Moose goal list this season. Moose assistant coach Marty Johnston says beyond scoring goals, Suess has been driving play for the Moose away from the scoresheet as well.

“He’s someone who comes to the rink every day and he puts his work in,” Johnston explained. “He does all the little things and the intangibles that it takes for a team to win. He takes hits to make plays, he goes to the net, he wins faceoffs and is real good on the penalty kill.”

The Moose also got a couple of assists from Jansen Harkins who pushed his November total to 23 points (4G, 19A). Harkins comes into the last game of the month with five more points than the next highest scoring skater in the league. Harkins is already tied for the most points in a month by an AHL player since Dec. 2016. A big night could push him into more rare company.

The Moose could be without their two top scoring defenders tonight. Cameron Schilling was recalled by the Winnipeg Jets today and joined the big club in Los Angeles. Meanwhile, Sami Niku missed last night’s game with an upper body injury.

The Moose take on a Chicago Wolves team that also played last night. The Wolves dropped a 4-2 decision the the IceHogs in Rockford. Chicago has fallen on hard times as of late, winning just twice in their past 10 games. However, the club did receive some talent from Grand Rapids since the club’s previous meeting. The Wolves have added Brandon Pirri, Nicolas Roy and Valentin Zykov to the fold. Pirri scored 29 goals in 2017-18. Zykov led the league in goals with 33 that same season. So the Moose will have more Chicago scoring threats to keep an eye on than previous matchups.

The Moose and Wolves drop the puck at 7 p.m. CT. Tune in to the game starting at 6:45 p.m. on moosehockey.com/listenlive, the Moose App and AHLTV.