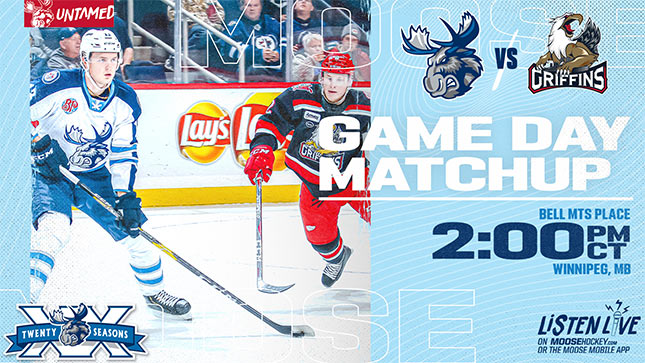 Yes last night’s 5-3 win over the Grand Rapids Griffins checked a few boxes for the Moose. Seth Griffith and Sami Niku scoring at even strength in the first period was a good start for the team. JC Lipon tallying twice on the power play, once late in the second, and again early in the third, was the perfect way to finish. Lipon’s second marker held up as the game-winner as the Moose locked things down late and Griffith added his second into an empty net.

Powering that quick overview, while dominating the box score, was Jansen Harkins and his five-assist performance. It was a feat only achieved once before since the Moose arrived in Winnipeg back in 1996. And the first time in almost 20 years. Defenceman Brett Hauer is the only other player wearing antlers to hit the mark. He recorded five apples against Orlando back on Jan. 22, 2000. To put Harkins achievement in relevance to this season, Seth Griffith led the team into yesterday’s matchup with five points (1G, 4A) in eight games. A mark Harkins reached in three periods while vaulting his way to the top of the Moose points leaderboard. Seven of Harkins’ eight points have come in Manitoba’s two wins on the season.

“I’m pretty happy about it, obviously,” Harkins said after the game. “You want to chip in, and I want to make plays offensively. I thought everyone was really moving out there today so it made it easier.”

Meanwhile plenty of eyes were also on a pair of Finnish defenders coming into the Moose lineup. Fans didn’t have to wait long for Sami Niku to get on the scoresheet as he scored in the first period. Niku was playing his first game since Oct. 11, and by chance it was also his 100th in the AHL. Meanwhile 18 year old sensation Ville Heinola made his AHL debut, recording one shot in the victory. After starting the game on separate pairings, the Moose coaching staff moved the two onto the same grouping. Should Niku and Heinola remain together, their puck-moving capabilities could make for some fun going forward.

“They have so much deception in their game. I mean, together they were really effective,” said Moose head coach Pascal Vincent. “As soon as they touched the puck, we had that puck. What I enjoyed too about their game together, is at times, skilled players will try to make the extra play. But those two tonight, both of them, they didn’t try to make the extra play. If there were no options, they used the simple play off the glass which is quite mature for young players like this.”

Now the trick is for the Moose to keep that momentum going into today’s matchup. It’s tough to beat the same team two days in a row and the Griffins certainly had their opportunities. Grand Rapids led 1-0 and 2-1 in the first period before the Moose scored three straight goals. After pulling within one in the third, the Griffins had some chances to tie the game. However, as the final period went on, the Moose seemed to funnel everything off to the boards and make it difficult for the Griffins to get anything toward Mikhail Berdin.

The home side will need it all to come together again today if they want to pick up their first back-to-back victories of the season.

Today is the fifth-annual Share the Warmth game, presented by Red River Co-op. Fans are encouraged to bring new or gently used items of winter clothing to the game to donate to Siloam Mission. Tickets are available at moosehockey.com/tickets or through the Moose App.