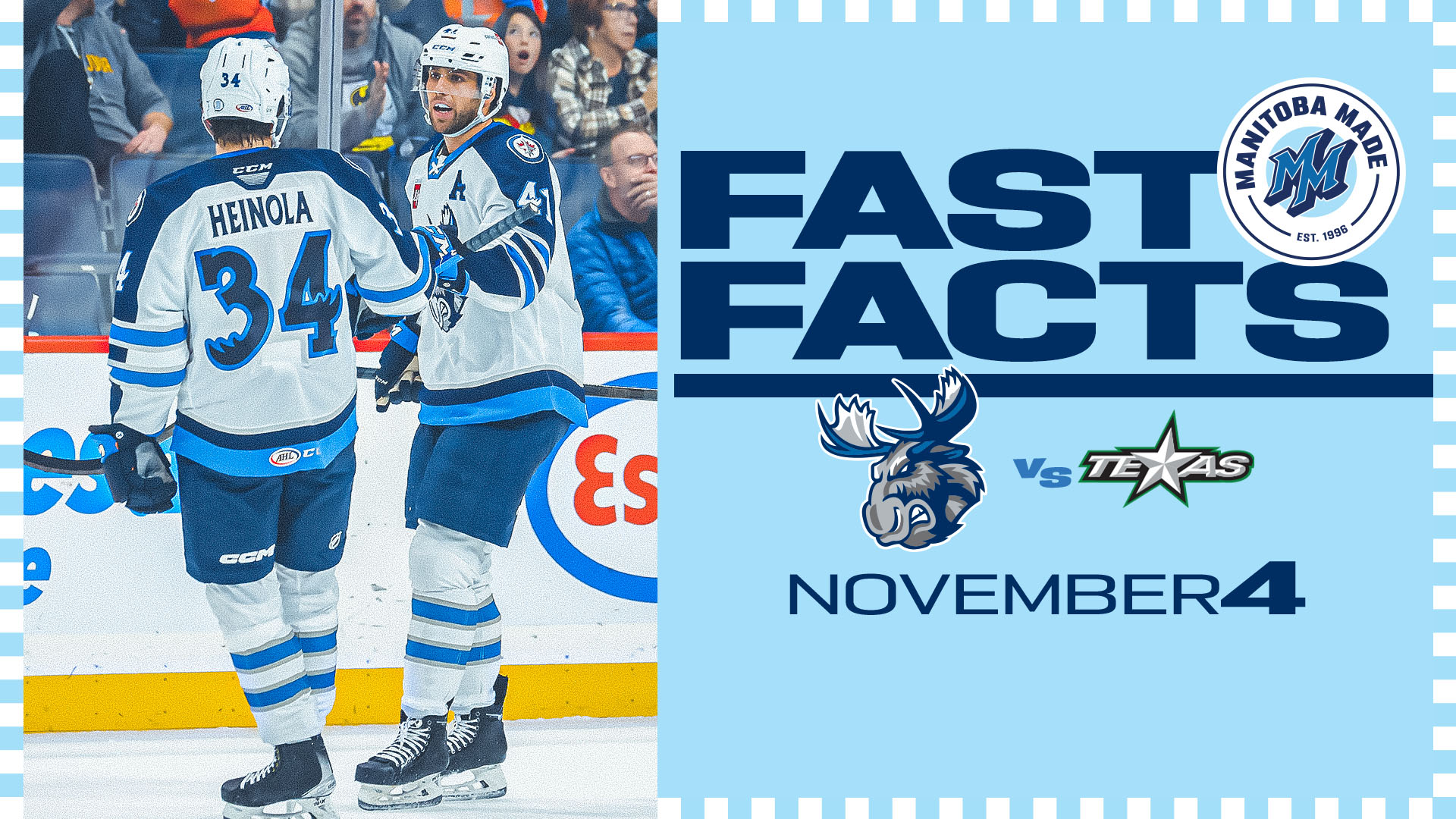 The Manitoba Moose continue their six-game home stand this evening hosting the Texas Stars at Canada Life Centre. The Moose bounced back into the win column their previous outing, scoring a 4-1 win over the Iowa Wild. Manitoba holds top spot in the Central Division coming into the evening’s action, but the Stars can pull even with a regulation victory. Tickets for tonight’s 7 p.m. tilt are available at MooseHockey.com/TICKETS.

Arvid Holm recorded his second win of the season in Manitoba’s previous outing. The netminder, who was drafted by the Winnipeg Jets in the sixth round in 2017, made 33 stops on route to the Sunday afternoon victory. Holm hasn’t lost a game in regulation this season with a record of 2-0-1, a goals-against average of 2.65 and a .927 save percentage. In all three games Holm has started this season, the netminder has been called upon to make over 30 stops. The Ljungby, Sweden native is no stranger to strong starts after posting a 5-1-1 record in his first seven starts of the 2021-22 campaign.

Clicking on the Power Play

The Moose have recorded a marker on the man advantage in four straight contests. That helped Manitoba to a record of 3-1-0-0 over that span. The Moose power play is currently clicking at 28.6%, scoring eight times on 28 opportunities. That number vaulted the squad into fourth overall in the AHL and first in the Central Division. The Moose have also recorded two power play goals in three of their past four games, all of which have been victories for the antlered ones. Forward Kevin Stenlund and defenceman Declan Chisholm lead the Moose this season with two power play goals each.

Cole Maier scored twice in Manitoba’s win over Iowa on Sunday. The Pequannock, New Jersey native is now up to five points (2G, 3A) in six games for the Moose this season. Maier’s two-goal contest also represents the second multi-point game of his 2022-23 season. Maier, who is now into his fourth full season with the organization, put together a strong campaign in 2021-22 that saw him record 37 points (17G, 20A) in 68 games. He also tallied a plus-11 rating and a pair of game-winning goals. The forward went on to add two assists in five playoff games and was named Manitoba’s team MVP.

Wyatt Bongiovanni scored his first professional power play goal in Manitoba’s 4-1 win over Iowa. The forward, who was signed to a two-year entry-level contract by the Winnipeg Jets in 2022, is up to two goals early in the season for the Moose. His first pro marker came against Chicago on October 21/22. The forward opened the scoring in that contest and helped propel Manitoba to a 5-2 win. Prior to his debut with the Moose last season, Bongiovanni spent four seasons with Quinnipiac University where he recorded 90 points (50G, 40A) in 123 games.

The Winnipeg Jets recalled forward Jansen Harkins on Wednesday. The forward posted nine points (4G, 5A) in six games with the Moose after being assigned to the team by Winnipeg to start the campaign. Going back to the 2019-20 campaign, Harkins has 40 points (12G, 28A) in 36 games played.

Mikey Eyssimont is currently in the midst of a three-game point streak during which the forward put up five points (1G, 4A). The 2016 Los Angeles Kings fifth round pick is second on the team with eight points (2G, 6A). through seven contests. The Littleton, Colo. native is a volume shooter and leads the Moose by a wide margin with 28 this season.