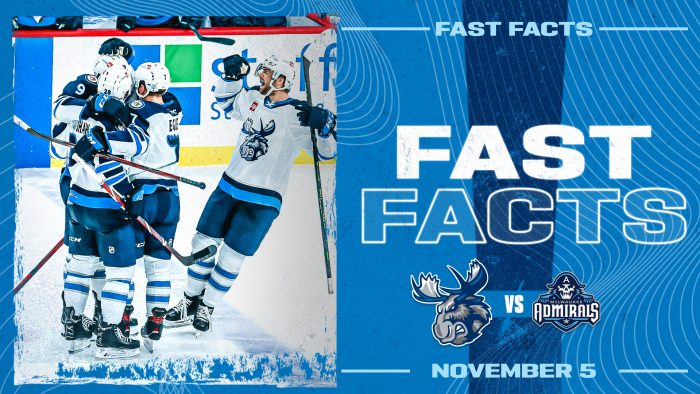 The Moose hit the road after posting a 3-1-0-0 record during their first home stand of the season. Despite the four-game set ending with a 4-1 loss to the Iowa Wild, the Moose were happy to grab six points in friendly territory before a lengthy six-game road swing. It’s a tough start to the trip as the Moose open with three games in three nights, starting this evening in Milwaukee. Tune in to the action on CJOB.com/sports, MooseHockey.com/LISTENLIVE or AHLTV.com. Coverage beings at 6:45 p.m. CT with puck drop at 7 p.m.

On March 12/20 the Moose travelled to Milwaukee ahead of what was supposed to be the team’s fifth meeting of a season to kick of a three-in three set for Manitoba. That game never happened as the AHL season was paused and the Moose returned to Winnipeg. Now, 602 days later, the Moose and Admirals finally play their game in Milwaukee.

After spending the first three games of the season on the road, the Moose returned home on Oct. 22 to play in front of their home fans for the first time since March 8/20. The team played their next four games at the Canada Life Centre and were able to bank six of eight points in a successful home stand. The four games included a shutout win and a grand total of 10 goals being scored over the four-game stretch. The Moose now head out on the road for the next six with stops in Milwaukee, Chicago, Rockford and Grand Rapids before returning home for a game on Nov. 18 against the Admirals.

Forward Cole Maier suited up for his 100th career AHL regular season game on Sunday afternoon when the Moose faced the Wild. The two-way forward has spent his entire AHL career with the Moose organization and began to play in Manitoba during the 2018-19 season. The New Jersey native has four years of Moose experience under his belt and has amassed 34 points (18G, 16A) in 100 games.

Moose forwards Kristian Reichel and David Gustafsson have begun heating up as the season moves along. Reichel, who is currently in his  fourth season with the Moose, had assists in back to back games over the weekend.  Gustafsson, a former second round pick of the Winnipeg Jets, has recorded two points (1G, 1A) in his last two contests. Gustafsson leads the Moose with six points (2G, 4A) in seven games this season while Reichel has three points (1G, 2A) in seven outings.

Forward Cole Perfetti checked in with his third point (2G, 1A) of the season in the loss to Iowa. The young forward is currently tied for second in Moose goal scoring. The Whitby, Ontario native is in his second season with the Moose and was second in team scoring during his rookie year, recording 26 points (9G, 17A) in the 2020-21 season.