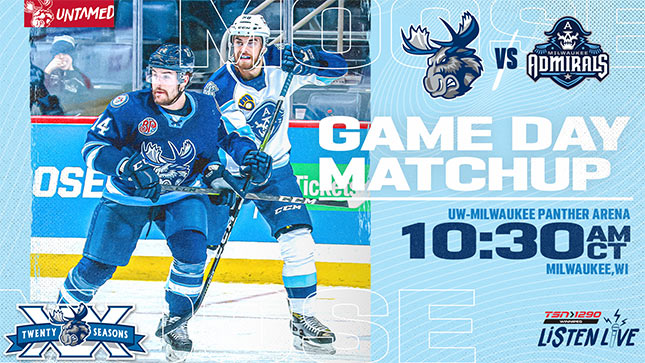 The Moose have been rolling in the win column to start a strenuous November schedule. The club swept their way to two straight wins in their first home stand of the month.

Jansen Harkins dominated in Saturday and Sunday’s matchups against the Grand Rapids Griffins. The centreman collected an assist all five Moose tallies scored in Saturday’s game. Harkins continued to generate offensively in Sunday’s matchup and posted a goal while adding two assists . Harkins was awarded the CCM/AHL Player of the Week for the period ending Nov. 3/19 in recognition of his eight point (1G, 7A)  performance.

“I’m pretty happy about it,” Harkins said. “Just one of those weekends, things were kind of going my way and the team was playing well. I don’t think (the award) happens if we don’t win.”

Harkins continued in speaking about the team’s lifted spirits after their back-to-back victories against the Griffins and how to leave the team’s October troubles behind them.

“I think just sticking to it and believing in ourselves. I think we were pretty confident this weekend and I think our play showed that.” Harkins said. “Adversity is a good thing for sure. Every team will go through it at some point. Getting through it at the start, it was a few weeks but it felt kind of forever. Hopefully we can get that out of the way and get playing to our potential like we did this weekend and if that happens I think we should be fine.”

The Moose added some depth to their roster which proved to be valuable as the team is currently in a two-game winning streak. Sami Niku, who was sidelined due to injury, collected two goals against Grand Rapids. Ville Heinola, who was assigned to the Moose by the Winnipeg Jets, posted his first AHL point (1A) on Cameron Schilling’s game winning goal in Sunday’s matchup against the Griffins.

Schilling appeared in his 500th AHL game on Sunday against Grand Rapids. The defenceman collected two goals in his milestone matchup.

Heading into Manitoba’s three game road trip, the Moose have announced two changes to their roster. C.J. Suess was reassigned to the Moose after making his NHL debut with the Winnipeg Jets on Nov.1 against San Jose. In his return to the Moose, the forward couldn’t hide his smile as he spoke of his experience in the NHL.

“I’ll remember that forever. It was a great experience overall,” said Suess. “It’s completely different, something I have never been through before. I was trying to soak it in as much as possible.”

Suess was sidelined for a majority of the 2018-19 season due to injury. Despite the difficulty in being away from the team, Suess discussed the reward of finally being back on the ice let alone the opportunity to play in the NHL.

“It was awesome. It makes you feel like all the work you put in was worth it. To know you can get there and it will push me to get back to there.”

The Moose also announced on Monday the team assigned goaltender Adam Carlson to its ECHL affiliate, the Jacksonville Icemen, and recalled goaltender Griffen Outhouse. The Likely, B.C. native has appeared in six games for the Icemen during the 2019-20 season, posting a 1-2-2 record while collecting a 4.35 goals against average and a .874 save percentage.

The Moose look to continue their winning streak south of the border in their matchup against Milwaukee. The Admirals are also currently in the winning column with their recent 5-2 win over the Wolves. Blackwell powered Milwaukee’s offence in posting three points (1G, 2A) against the Wolves.

For the Moose to uphold their winning streak, the keys to the game are what proved to be successful for the club against the Griffins. Team chemistry was a factor in the Moose 7-4 victory over the Griffins on Sunday. Specifically for the duo of Seth Griffith and Andrei Chibisov. Griffith posted a hat trick on Sunday and Chibisov was credited the primary assist on two of his goals. Another significant improvement  for the Moose has come on the power play. The Moose scored four of their 12 goals this past weekend on the man advantage. The Moose overall power play percentage spiked from 3.6 to 14.3 per cent in a matter of two games.

The Moose and Admirals go head-to-head at 10:30 a.m. CT this morning at UW-Milwaukee Panther Arena. Catch the game on TSN 1290 and moosehockey.com/listenlive getting going at 10:15 a.m. This morning’s game is also available on AHLTV.