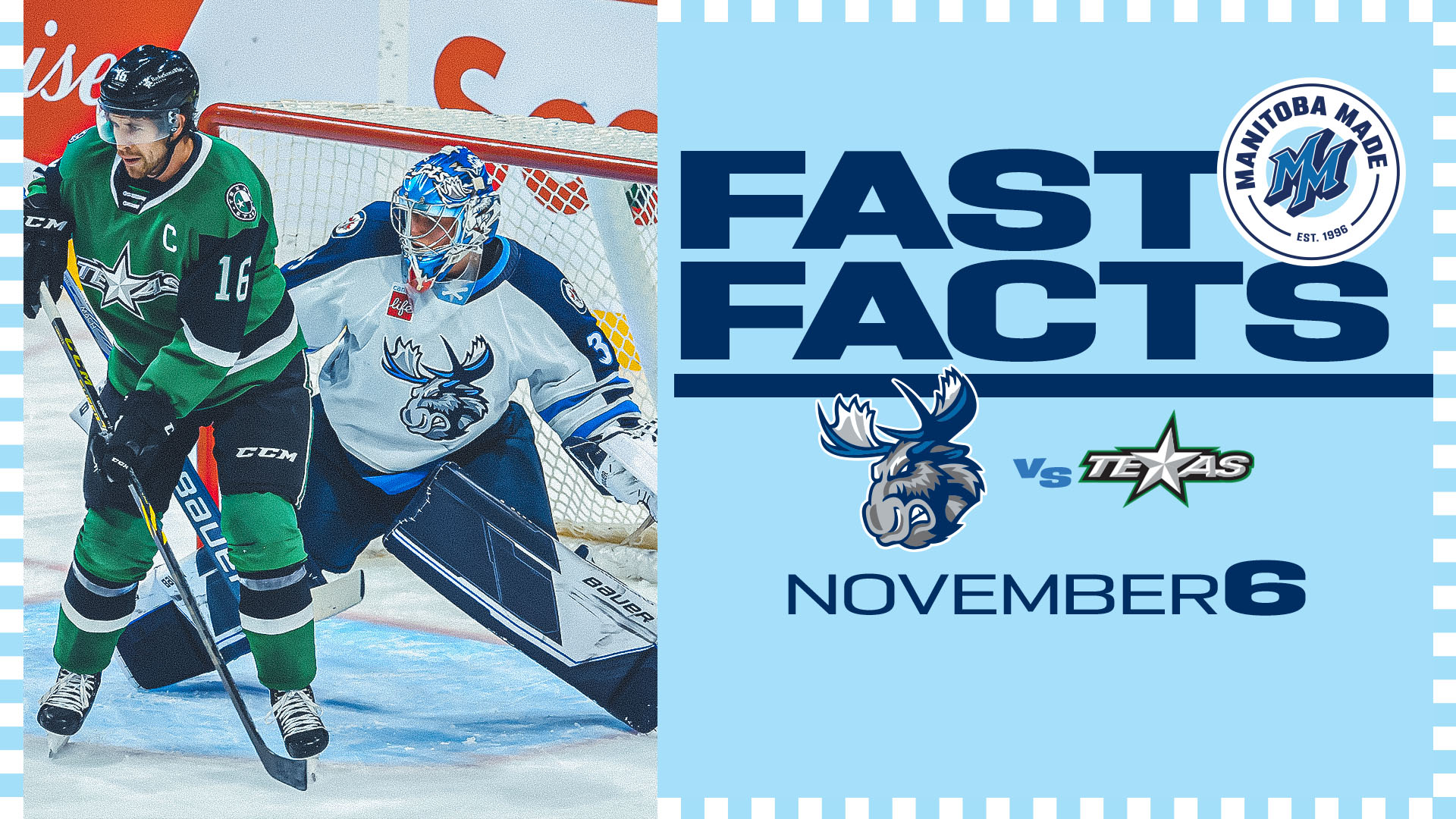 The Manitoba Moose are in search of a split today when they host the Texas Stars at Canada Life Centre. The visitors scored a 4-1 victory on Friday night, riding a three-goal first period to the win. Anton Khudobin made 36 saves for the Stars. Manitoba hasn’t lost back-to-back games yet this season and will try to keep it that way. Tickets for today’s 2 p.m. game are available at MooseHockey.com/TICKETS, the first 3,000 fans in attendance will receive a team poster. Don’t forget all Ticket Members get access to an exclusive, post-game, full-team autograph session following the game.

Dean Stewart scored his first goal of the season in Manitoba’s 4-1 loss against Texas on Friday night. The defenceman, who was re-signed to a one-year contract by the Moose this summer, tied the contest in the first period 17 seconds after the Stars had opened the scoring. The 2016 seventh round pick of Arizona made his AHL debut this past season with Manitoba and secured himself nine points (1G, 8A) in 20 games played. Prior to his time with Manitoba, the defenceman spent time in the ECHL with the Wichita Thunder where he tallied 47 points (10G, 37A) in 80 contests.

The Moose have played three Sunday contests ahead of today’s game. Manitoba is currently 3-0-0-0 on Sundays and outscored its opponents by a count of 14-4 in the trio of contests. The Moose blanked Rockford 4-0 on October 16, which represented Oskari Salminen’s first AHL win and shutout. October 23 saw the Moose win big on the road in Rockford to the tune of 6-3. Manitoba used a four-goal second period to secure the victory. The most recent win came on October 30 with Manitoba scoring four straight goals and Arvid Holm collecting 33 total saves against the Iowa Wild.

Steady in the Crease

Oskari Salminen took the Moose crease in his first relief appearance of the season on Friday. The netminder played the final 40 minutes of action and registered 17 saves on 18 shots. Salminen, who was signed to a two-year entry-level contract by the Winnipeg Jets this summer, started his Moose career with three straight wins. The Kotka, Finland native now sits with a record of 3-1-0-0 with a 2.16 goals-against average and a .916 save percentage. He also has a shutout under his belt, which came in his first AHL start on October 16 against the Rockford IceHogs.

The Moose haven’t scored the first goal of the game in four straight outings. The team holds a 2-2-0-0 record in those contests. Manitoba started the season on a run of opening the scoring in four straight games and actually managed to build a 2-0 lead in all those games. The Moose rattled off a 3-0-1-0 record in those outings. Four different players have recorded first goals for the Moose this season with Jansen Harkins (on recall), Wyatt Bongiovanni, Leon Gawanke and Declan Chisholm opening the scoring. During the 2021-22 campaign Chisholm, Jeff Malott and Evan Polei each scored four first goals to lead the Moose.

Jeff Malott led the Moose with five shots in Manitoba’s loss against Texas. The forward, who was re-signed to a two-year contract with Winnipeg in 2022, is up to three points (2G, 1A) in seven games this season. Over the past two seasons, no Moose player has scored more goals than Malott who has notched 39 including a career-high 23 tallies in 2021-22.