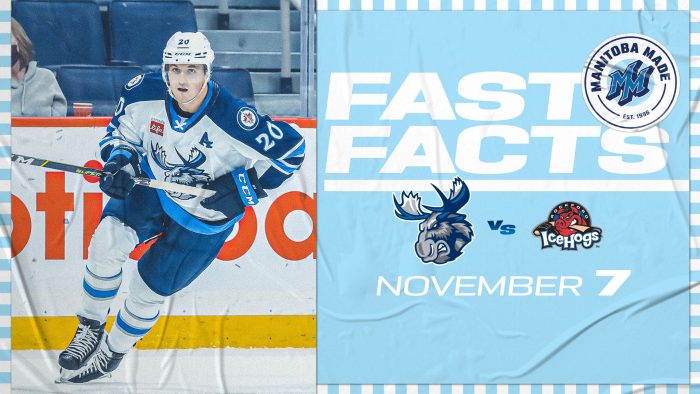 The Moose close out their first three-in-three set of the season with a chance to earn points in all three outings. Manitoba stomped the Chicago Wolves last night to the tune of a 5-1 score. The Moose face off against the Rockford IceHogs this afternoon in the teams’ first meeting of the season. Puck drop is slated for 4 p.m. CT on 680 CJOB. Coverage on CJOB.com/sports, MooseHockey.com/ListenLive and AHLTV.com begins at 3:45 p.m. CT

Jimmy Oligny became the fifth Moose defender to record a goal in Manitoba’s ninth game of the season. The Moose are tied with the Henderson Silver Knights for second in the league having five defencemen with a goal next to their name. Rochester paces the AHL with six. Johnny Kovacevic also scored in the game to push his total to three on the season. With goals in back-to-back games, Kovacevic is part of a pack of six defenders all tied for the league lead in goals among blueliners.

The Moose offence broke out in a big way during Manitoba’s 5-1 win in Chicago last night. That outburst was propelled by three players scoring their first goals of the season. Kristian Vesalainen struck on the power play for his first, in just his second game. Meanwhile, Nicholas Jones buried his first in his fourth game of the season, and second outing since returning from injury. Jimmy Oligny rounded out the group as he recorded his first tally in his ninth game. Oligny now has three points (1G, 2A) on the season, matching his 21-game total from the 2020-21 season.

Cole Maier scored the first Moose shorthanded goal of the season in the third period of last night’s contest. The previous Manitoba shorty came April 8/21 off the stick of Nicholas Jones, assisted by Maier. The Pequannock, N.J. native also scored a shorthanded tally during the 2019-20 season bringing Maier up to three points (2G, 1A) when down a man. Maier is off to a hot start this season, posting five points (3G, 2A) in his first nine games. His three goals are tied with Johnny Kovacevic for second on the team.

Welcome to the AHL

Forward Todd Burgess made his AHL debut in Chicago last night. Burgess recorded two shots on goal and was an even plus/minus rating in his first game in antlers. The Phoenix, Ariz. product played his first three professional games earlier in the season with the ECHL’s Newfoundland Growlers. Burgess notched a goal in each of his first three games, including two shorthanded goals. Burgess was a fourth round pick, 103rd overall, of the Ottawa Senators in the 2016 NHL Draft.

Goaltender Philippe Desrosiers checked in with his first win in antlers as part of the victory over Chicago. A former draft pick of the Dallas Stars, Desrosiers recorded 22 saves on 23 shots in his Moose debut. The netminder registered a stellar 1.00 goals-against average and a sparkling .957 save percentage with the win over the Wolves on Saturday night.