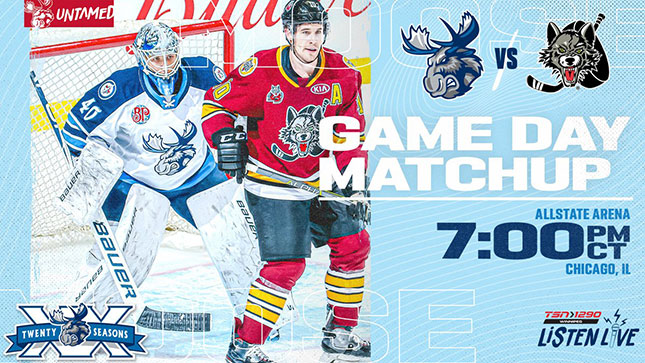 The Moose are in Chicago tonight looking to make it a four-point road swing. Manitoba split the first two games of the trip with a 6-4 loss in Milwaukee on Wednesday and a 4-0 win in Rockford last night.

Mikhail Berdin was the standout performer in last night’s win. It was clear early on the Moose netminder was locked in. He made 14 saves in the opening period, 17 in the second and wrapped up the shutout with 10 in the third. Berdin was also effective moving the puck, whether it was clearing on the penalty kill or snapping outlet passes to his defencemen. While the Ufa, Russia native has been solid for Manitoba this season, he hadn’t quite reached the level of dominance he displayed last season. Until last night. His 41 saves were the second-most of his career and the most in a winning effort.

“I just felt good today,” said Berdin following last night’s game. “My defence played really good in front of me, so it’s not just my shutout. I think it was all teamwork and a good game.”

While Berdin buttoned things down at one end of the ice, the power play just kept on scoring at the other end. Luke Green and C.J. Suess each tallied on the man advantage as the Moose scored twice on three opportunities. The Moose power play is among the best in the league right now, scoring on seven of its last 12 chances. That works out to a 58.3 per cent success rate. This hot streak jumped the Moose power play from 3.8 per cent to 20.0 per cent. A rise from 30th in the league to tied for eighth. JC Lipon is the only player with multiple power play goals over the four games with six different scorers chipping in.

A few Moose skaters kept their point streaks rolling. Jansen Harkins, Seth Griffith and Sami Niku each pushed their runs to four games. Andrei Chibisov comes into tonight’s game with a three-contest assist streak. C.J. Suess has goals in back-to-back games since returning to the Moose from the Winnipeg Jets.

For the second straight road swing the Moose head into Chicago on a back-to-back while the Wolves come in the fresher team. The Wolves last played on Thursday morning in Iowa. Like the Moose they found themselves on the wrong side of the shot count, but the right side of the score. Garret Sparks made 35 saves as the Wolves grabbed a 3-0 win. That despite being outshot 35-15 in the contest.

The last time the Moose faced Chicago it was Oscar Dansk pulling that act on Manitoba. The Moose outshot the Wolves by a 25-19 margin, with Chicago winning 4-0. Once again, the Moose will have to find a way to shut down rookie star Lucas Elvenes. The Swedish forward is second in the AHL with 20 points (5G, 15A) in 13 games. He has only been held off the scoresheet once this season, and rolls in on an 11-game point streak.

Moose forward Derek Hulak knows his team is in for a difficult matchup but feels it comes down to trusting the systems in place.

“(It’s going to be) another hard fought game. They’re a good team. They’ve got a lot of good, high-end talent. They have some big guys up front,” said Hulak who made his Moose debut last night. “If we just stick to our game and work hard, hopefully we’ll finish off a good weekend here.”

The Moose and Wolves drop the puck at 7 p.m. CT at Allstate Arena tonight. Coverage on TSN 1290 starts at 6 p.m. CT with Moose Weekly hosted by Austin Siragusa. You can also tune into the game on moosehockey.com/listenlive or AHLTV.

Following tonight’s game, the Moose return home for Monday’s Remembrance Day game when the Moose host the Texas Stars. The Moose will wear military-themed jerseys which will be auctioned in support of Soldier On. Puck drop is scheduled for 4 p.m. CT.