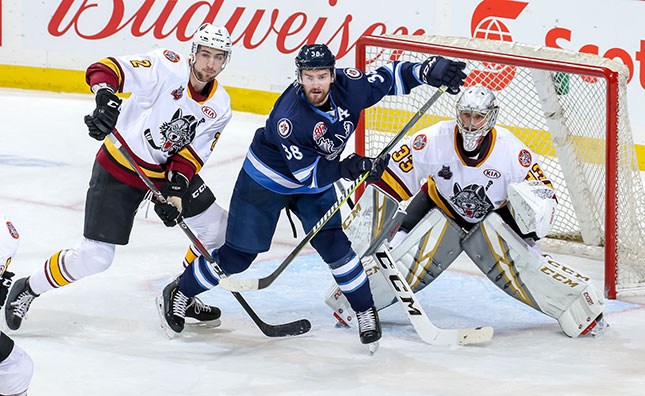 The Moose close out a quick two-game road swing as they clash against the Chicago Wolves tonight at Allstate Arena. Manitoba is coming off a fifth straight loss, last night, at the hands of the Grand Rapids Griffins. The Moose outshot their hosts by a 37-22 count at Van Andel Arena, but were stymied by Winnipegger Calvin Pickard. The Griffins netminder made 36 saves, while keeping the Moose off the board until early in the third period. Jansen Harkins scored the lone Moose goal in defeat, while Matt Puempel recorded his first AHL hat trick to power the Griffins offence. Joe Veleno added his first professional goal to round out the scoring.

Moose head coach Pascal Vincent was a fan of how his team played against the Griffins, but says a small segment of the game contributed to the loss.

“I liked our game. Having said that, there was five to seven minutes in the second period where we lost track of what we were doing well in the first period,” said Vincent. “We were keeping the game simple and playing north-south. I think that five-seven minutes was a reason why we didn’t win the game. 55 or 54 minutes out of 60 isn’t good enough. We need to play 60 minutes.”

Aside from those five to seven minutes, the coach had plenty to talk about in the “positive” column.

“A lot of good things. The way we came out, we were flying. We were moving the puck right. We were defending right, on the right side of the puck. We were creating turnovers.”

Forward Joona Luoto picked up his first AHL point in the loss by assisting on Harkins’ third period tally. The Finnish winger hit the milestone in his fifth game with Manitoba. Luoto joined the Winnipeg Jets organization this off-season after signing a three-year, entry-level contract with the club. The Tampere, Finland product already has plenty of pro experience, having suited up for 129 Liiga games, while posting 38 points (21G, 17A).

Speaking of Harkins, the goal was his second of the campaign. The North Vancouver, B.C. product is tied for second on the Moose in goals and tied for the team lead with 18 shots on goal. Harkins is on pace to blow past his previous career high shot total from last season. The forward posted 83 shots in 70 games last season, while scoring on 18.1 per cent of his attempts. This season Harkins 18 shots have come in just seven games. That averages out to 2.6 shots per game, while last season he averaged 1.2 per outing.

Defenceman Johnny Kovacevic stayed hot. The rookie defender owns the team’s longest point-streak of the early season at three games. During that span, Kovacevic has a goal and two assists. The Merrimack alumni has points in four of his first five professional games, going back to last season. He has five points (2G, 3A) in those contests. He also leads the Moose with a plus-three rating.

Tonight’s opposition rolls in on a two-game win streak as the Wolves picked up 3-2 victories over Texas and Milwaukee. Chicago holds a 3-3-0-1 mark on the season, and a 2-1-0-1 record at home. Similar to the Moose, offence has been tough to come by for Chicago. Each team has scored 15 goals in the first seven games of the campaign. For Chicago, averaging 214 goals per game is a large drop from averaging 3.29 per game last season, and scoring the fourth-most goals in the AHL in 2018-19.

Tonight’s game can be heard on moosehockey.com/listenlive and AHLTV with coverage starting at 6:45 p.m. CT, followed by puck drop at 7 p.m.

Following tonight’s game, the Moose head home to prepare for a two-game set against the Grand Rapids Griffins on Saturday and Sunday. Saturday’s game is the annual Hockey Fights Cancer game, followed by Share the Warmth presented by Red River Co-op in support of Siloam Mission. For tickets to these upcoming home games, visit moosehockey.com/tickets.