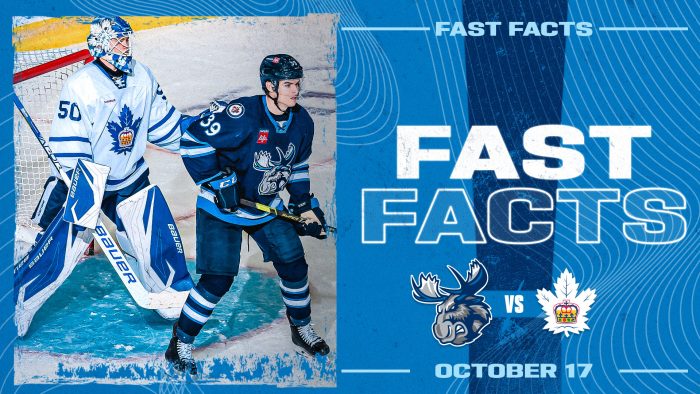 The Moose get right back at it today following a 5-1 loss to Toronto to open the season yesterday. The two teams clash in a rematch of yesterday’s tilt at 3 p.m. CT. There are plenty of ways to catch this afternoon’s game. Listen on 680 CJOB, CJOB.com/sports or MooseHockey.com/LISTENLIVE. You can also watch the game FOR FREE through the AHLTV.com Freeview.

Welcome Back, Coach!
Moose Head Coach Mark Morrison made his return to the Moose bench and debut as an AHL head coach yesterday against the Marlies. The Delta, B.C. native’s coaching career reaches back two decades to his time as a player/coach with the Fife Flyers. Morrison took on the head coaching responsibilities for the ECHL’s Victoria Salmon Kings part of the way into the 2006-07 season. He remained at the helm of the club until 2011-12 when he joined the Winnipeg Jets organization as an assistant coach with the St. John’s IceCaps. Morrison came with the team to the prairies in the club’s return to Manitoba before moving on to join the Anaheim Ducks as an assistant. Morrison took over the Moose head coaching position from Pascal Vincent who was hired by the Columbus Blue Jackets this past summer as an associate coach.

Putting On Antlers
Defenceman Simon Lundmark made his North American professional debut yesterday at Coca-Cola Coliseum. Lundmark posted three shots on goal and an even plus/minus rating in his first AHL contest. The Stockholm, SWE product was a second round pick, 51st overall, of the Winnipeg Jets in 2019. He played last season in the Swedish Elite League for Linkopings where he recorded 10 points (2G, 8A) in 47 games. Five additional players made their Moose debuts yesterday with Mikey Eyssimont, Luke Johnson, Greg Meireles, Austin Poganski and Evan Polei all donning the antlers for the first time.

Pew Pew Pew
The Moose tallied 35 shots on goal in defeat yesterday. Driving that shot total were Luke Johnson, Kristian Reichel and Mikey Eyssimont who combined for a whopping 17 shots. Johnson and Reichel both recorded six shots. It’s the sixth time in his career Johnson has recorded six or more shots. His career high is eight, set on Nov. 19/17 against Chicago. The mark was a new career high for Reichel. Eyssimont posted five shots and is no stranger to high shot totals. The Littleton, Col. native recorded five or more shots 10 times during the 2020-21 campaign.

Picking Up Where They Left Off
Johnathan Kovacevic and Cole Maier jumped right back into the rhythm yesterday, picking up assists in the season opener. Kovacevic’s final 10 games of 2020-21 saw the defenceman rack up 11 points (2G, 9A) on the way to leading the Moose defence in scoring. Meanwhile, Maier scored in Manitoba’s season-closing game and recorded 19 shots over his final five outings of the campaign. Both Kovacevic and Maier served as alternate captains in yesterday’s tilt.