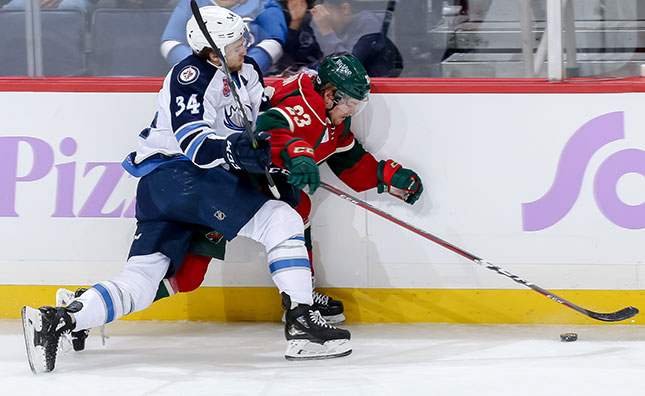 The Manitoba Moose host the Iowa Wild tonight at Bell MTS Place (7 p.m. CT) for the first of eight meetings this season between the clubs. This weekend’s tilts actually represent the only two games the teams play each other in the 2019 calendar year. The last time the divisional rivals clashed was Nov. 24, 2018, a total of 328 days ago. After tomorrow’s matchup, they’ll wait another 97 days to face off again on Jan. 24, 2020 in Iowa.

Fresh off his recent recall to the Winnipeg Jets, defenceman Nelson Nogier says tonight’s game will be about making quick adjustments to any new wrinkles the Wild have in their schemes.

“Obviously we’re going to see some new systems that we’re not familiar with here and not used to, recently,” said Nogier. “But that being said we’ll just adjust as quick as we can and just continue on with the game.”

The Wild claimed the 2018-19 season series by winning three of the four games, and picking up a point in all four meetings. The lone Moose victory came on Nov. 23, 2018 courtesy of a Mason Appleton overtime winner. Appleton led the Moose with three points (1G, 2A) against Iowa last season, while Mason Shaw led the Wild with six points (1G, 5A) against the Moose.

The Moose come into this weekend’s matchup in search of their first victory on home ice. The team dropped its first two contests on Bell MTS Place ice to the Toronto Marlies to bring their overall record to 1-3-0-0 to start the season. The pair of losses led into a long practice week for Manitoba focused on battles and taking control of the front of the net.

“The main focus was the one-on-one battles this week and reinforcing the main systems,” said Moose head coach Pascal Vincent. “But in order to be good at systems, you need to be good at one-on-ones.”

Vincent revealed defenceman Sami Niku will remain out of the lineup this weekend as he continues to recover from a lower-body injury. Forward Kristian Reichel will also miss this weekend’s action with a lower body injury.

Meanwhile the Wild come into the contest on a roll to start the season. The visitors tonight have points in each of their first four games, posting a 3-0-0-1 record. That said, it hasn’t been easy for Iowa, who has been to the shootout in their past two outings. The Wild also have yet to score the first goal in any of their games.

Iowa also lost some offensive firepower this week with leading scorer Gerry Mayhew earning a call-up to the Minnesota Wild.  Mayhew racked up six points (3G, 3A) in his first four AHL games, to go with a plus-five rating. He made a quick impact in the NHL by scoring in his debut against the Maple Leafs. Mayhew totaled 60 points (27G, 33A) in 71 games with Iowa last season.

Tickets for tonight’s matchup are available at moosehockey.com/tickets. Puck drop is slated for 7 p.m.

The game will be broadcast on TSN 1290, moosehockey.com/listenlive and AHLTV. Coverage begins at 6 p.m. with Moose Weekly hosted by Austin Siragusa. Daniel Fink takes over with the pre-game show at 6:45 p.m.

The teams matchup again tomorrow evening in a 6 p.m. affair. It’s the Moose Halloween game, so be sure to wear your best costume and get ready for some trick-or-treating fun. The first 3,000 fans through the doors at Bell MTS Place will receive a reusable trick-or-treat bag to use on the concourse that night. Snag your tickets at moosehockey.com/tickets.