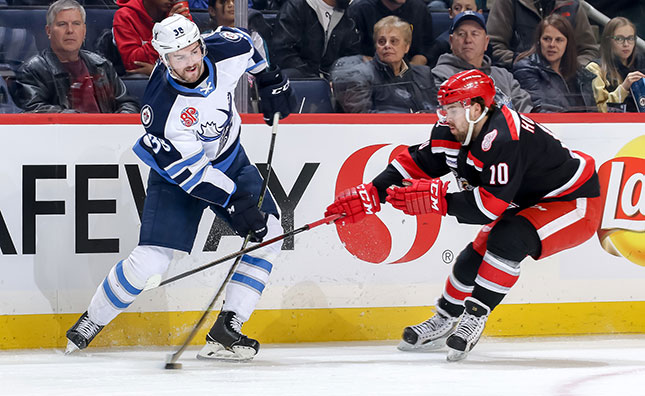 The Moose are headed on the road after a difficult home stand that saw the team drop four straight games to the Toronto Marlies and Iowa Wild. The club hopes a change of scenery might help break the team out of its current slump.

The challenge doesn’t get easier for the Moose as they continue a stretch of 13 straight games within their tough Central Division. Tonight’s opponent, a long-time rival in the Grand Rapids Griffins. It was the Griffins who just managed to hold off the Moose at the end of the 2018-19 season, slipping into the post-season by two points. Manitoba posted a 2-4-2-0 record against Grand Rapids during the campaign, meaning a slightly better mark might have granted the team a post-season berth.

This season’s edition of the Griffins is more youthful than previous iterations of the team, but balancing that youth is an abundance of skill. The Grand Rapids lineup features four Detroit Red Wings first round picks – Michael Rasmussen (ninth overall, 2017), Filip Zadina (sixth overall, 2018), Joe Veleno (30th overall, 2018) and Moritz Seider (sixth overall, 2019). The hosts are coming off a 3-0 victory over the Milwaukee Admirals. Goaltender Calvin Pickard recorded the 26-save shutout. The win pushed their early season record to 3-2-0-1.

The Moose feature a pair of Winnipeg Jets first rounders on their roster, but only Kristian Vesalainen will be available to the club tonight. Logan Stanley is on the shelf with a “mid-body” injury, according to head coach Pascal Vincent. The club is also lacking Sami Niku, still recovering from a lower-body injury. Defenceman Nelson Nogier knows dealing with the adversity of injuries is just part of what a team goes through over the course of a season.

“It’s tough,” said Nogier. “Those are pretty big pieces of our back-end, but that being said, our young guys are really stepping up and making real nice plays out there. So it’s just a matter of making sure they feel comfortable in those roles.

Video work was a key part of the preparation this week as the team readied-up for this matchup against the Griffins, and tomorrow’s tilt in Chicago (7 p.m.). Forward Logan Shaw says the sessions were beneficial in showing the holes in Manitoba’s game that need to be cleaned up.

“Right now video is our friend. We have to learn from what has happened in the past, but also forget about the outcomes of the games and be ready to go on the right foot,” explained Shaw. “Everyone has to be ready to work this weekend. These are huge games for us. It’s early in the season, but we’re behind the eight-ball a little bit right now. That’s not necessarily a bad thing, it’s maybe a little bit of adversity that we’re facing. I think it’s a big weekend for us.”

The Moose and Griffins go head-to-head at 6 p.m. CT tonight at Van Andel Arena. Coverage of tonight’s game starts at 5 p.m. with Moose Weekly hosted by Austin Siragusa on moosehockey.com/listenlive. The pre-game show gets going at 5:45, with TSN 1290 joining in-progress. Tonight’s game is also available on AHLTV.

Following this evening’s matchup, the Moose head to Chicago where they’ll face the Wolves tomorrow night. The team then returns home to prepare for a weekend set against the Griffins at Bell MTS Place on Nov. 2 and 3. Tickets are available at moosehockey.com/tickets.