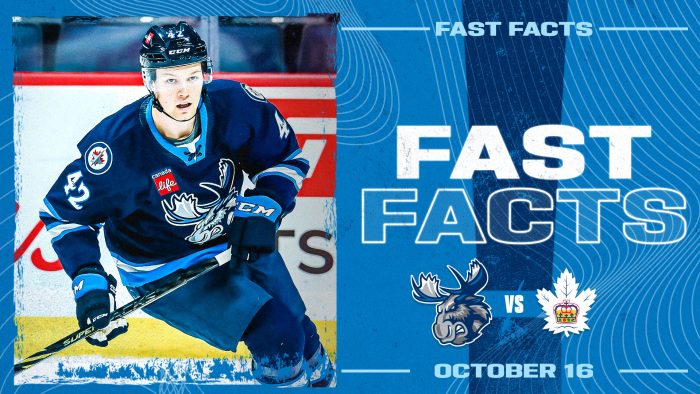 The day is finally here! The Manitoba Moose open their quest for the Calder Cup this afternoon in Toronto against the Marlies. The Canadian rivals saw plenty of each other in last season’s Canadian Division with the Moose taking the season series by a five wins to four count. The teams are back into their normal divisions, but plenty of history remains as the teams play their 109th and 110th all-time meetings this weekend.

Tune in to the action with the AHLTV Freeview! Simply sign up for an account and enjoy the game for free. Be sure to choose the “Away” audio to hear Daniel Fink on the call. If you’re on the go, listen to the game on CJOB.com/sports, MooseHockey.com/LISTENLIVE or through the redesigned Manitoba Moose App. Coverage begins at 2:45 p.m. CT with puck drop just after 3 p.m. CT.

A Return to Normality

Tonight’s game marks the first of the 2021-22 season and hopefully a return to a more normal AHL season. The Moose ended off last year with an overall record of 18-13-3-2 which was good for 41 points and second place in the American Hockey League’s Canadian Division. Another bonus of this upcoming season is the return of the familiar Central Division. The Moose battle the likes of Rockford, Chicago, Grand Rapids, Iowa, Texas and Milwaukee while also clashing with North Division opponents like Toronto, Laval and Belleville.

All Around Me are Familiar Faces

The Moose have the pleasure of returning 18 players from the 2020-21 roster. Many played meaningful games, and all will be looking to take the next step in their career. Leading goal-scorer Jeff Malott and team MVP David Gustafsson both return up front. The blueline is anchored by Winnipeg Jets draft picks including Johnathan Kovacevic, Declan Chisholm and Ville Heinola who all hit double-digits in points last season. Returning experienced players including Jimmy Oligny, Nelson Nogier and C.J. Suess provide the club with extra stability and leadership.

All Around the World

The current Moose roster comes in all shapes and sizes and has a bevy of flavours in its overall make-up. The province of Ontario is well represented with five players calling it home. Alberta and Quebec have a pair each, while Saskatchewan claims one. Our neighbours to the south are far and away the leading producer of Moose talent with ten skaters hailing from the United States. There’s also a distinct European vibe with Germany, Russia, Latvia, Sweden, Finland and the Czech Republic all providing one or multiple players to the roster.

From Russia With Love

Mikhail Berdin will be back between the pipes for the Moose for the upcoming season. The Ufa, Russia product logged 1742 minutes this past season and appeared in 30 of Manitoba’s 36 games. The Winnipeg Jets sixth round pick in 2016 posted a 13-11-4 record alongside a 2.89 goals-against average and a .897 save percentage. The netminder has suited up for 95 games in a Moose uniform and projects to reach game number 100 sometime in the month of October. Berdin also enters the year with 45 victories, tied for seventh with Fred Brathwaite on the team’s all-time list.

With the Big Club

Forward Cole Perfetti officially made his National Hockey League debut when the Winnipeg Jets faced the Anaheim Ducks on Oct. 13/21. The Whitby, Ont. product played 9:49 of the contest. Perfetti was second on the Moose with 26 points (9G, 17A) in 32 games. He was named the CCM/AHL Rookie of the Month for April and earned team honours as Moose Rookie of the Year.