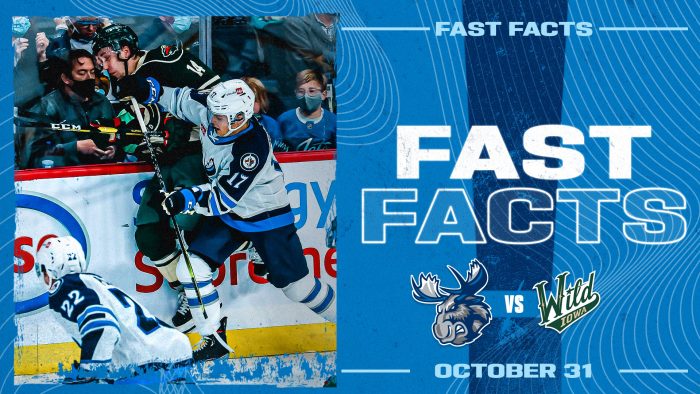 The Moose ride their first three-game winning streak of the season into today’s matchup against the Iowa Wild on home ice (2 p.m. CT). Manitoba seeks to finish off its four-game home stand with a perfect record before heading out for an extended road swing. It’s the Halloween Game at Canada Life Centre so dress your spooky best and don’t forget the first 3,000 fans through the doors will receive a reuseable tote bag. Tickets are available at MooseHockey.com/TICKETS. Coverage on CJOB.com/sports, MooseHockey.com/LISTENLIVE and AHLTV.com gets going at 1:45 p.m. CT.

Sunday afternoon’s win against the Iowa Wild was special for a few different members of the Moose. Thomas Caron, who entered camp on a PTO, scored his first career professional goal in the first period. With the Wild pressing in the third, Simon Lundmark unleashed a shot from the point that found twine for his first career AHL goal. Forward Greg Meireles finished the contest with his first AHL two-assist game as the Moose captured the win in front of their home fans.

Mikhail Berdin started his fifth game of the season on Saturday afternoon. 32 saves later, he officially recorded his third win of the season. The Russian netminder has spent his entire AHL career with the Moose and marked the win by suiting up in his 100th game. That mark is good for seventh all-time in Moose history as Berdin moves above current Winnipeg Jets goaltender Connor Hellebuyck. Another Moose will follow in Berdin’s footsteps coming up, as the next time Cole Maier steps on the ice it will be for his 100th career AHL game which has also been entirely with the Moose organization.

Today’s game marks the fifth time in seven games to start the season the Moose start at 4 p.m. or earlier. The Moose are 3-1-0-0 in their early start games so far. Johnathan Kovacevic, Leon Gawanke and Cole Maier lead the Moose with three points (1G, 2A) each in those contests. For Kovacevic and Gawanke, all their points have been recorded in matinee games. Kristian Reichel leads the Moose with 16 shots in games starting earlier than 4 p.m.

The line of Thomas Caron, Greg Meireles and Evan Polei was a crucial part of Manitoba’s win yesterday. The trio was on the ice for three Moose goals and combined for four points, while posting a combined plus-six rating. Meireles is tied for second on the Moose with four points (1G, 3A) while Polei has two assists and Caron has one goal. The combination has been together for four games, uniting for the first time in Laval on Oct. 20.

Forward Cole Maier checked in with his fourth point (2G, 2A) of the season in the win over Iowa. The dependable forward is currently tied for second in Moose scoring. The Pequannock, New Jersey native is in his fourth season with the Moose and has played in 99 career AHL games, all with Manitoba. Maier has 34 points in his Moose tenure.