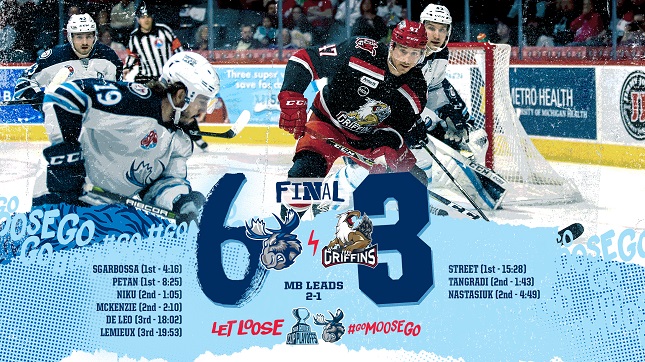 Game Story
The Manitoba Moose (2-1) and Grand Rapids Griffins (1-2) resumed hostilities at Van Andel Arena on Wednesday for Game 3 of their Central Division Semi-Final series.  Manitoba silenced the home crowd early with Mike Sgarbossa knocking in a Chase De Leo rebound just 4:16 into the contest.  The Moose added to their lead 8:25 into the frame with a power play goal off the stick of Nic Petan, who fired a one-timer along the ice and past Tom McCollum.  The Griffins used a power play goal of their own to get on the scoreboard with 4:23 left in the frame courtesy of Ben Street.  A melee ensued following the goal which resulted in 62 penalty minutes being handed out.  The Moose took care of the penalty kill resulting from the fracas and got to the break with a 2-1 lead.

Manitoba opened the second frame by extending its lead 1:05 into the period.  Immediately after a Moose power play, Sami Niku’s wrist shot found its way through a crowd and into the net.  It only took Grand Rapids 38 seconds to cut into the Moose lead as Eric Tangradi got in behind the defence and made good on the opportunity.  The Moose responded 43 seconds after that courtesy of Skyler McKenzie who tapped in a brilliant one-time feed from Julian Melchiori to move the score to 4-2.  That advantage was short-lived as Zach Nastasiuk struck for Grand Rapids at 4:49 of the frame for a 4-3 count.  The period settled out from there, but Niku nearly struck for his second of the period on a 2-on-1 when he rattled a shot off the inside of the post.  Without any further scoring in the period, the Moose took their 4-3 lead to the third.

The final 20 minutes saw the Moose hang on as the Griffins pushed for a tying goal.  Eric Comrie made 15 saves in the period to push his total to 45 on the night.  With time winding down and the Grand Rapids net empty, Chase De Leo put together a strong individual effort to score an empty net goal and put the Moose in the driver’s seat.  Brendan Lemieux tacked on another tally with seven seconds left as Manitoba claimed a 2-1 series lead with a 6-3 victory in Grand Rapids.

The Moose and Griffins have a chance to eliminate Grand Rapids on Thursday evening in Game 4 of the Central Division Semi-Final.  Tune into the action on TSN 1290, moosehockey.com/listenlive and the Moose App.