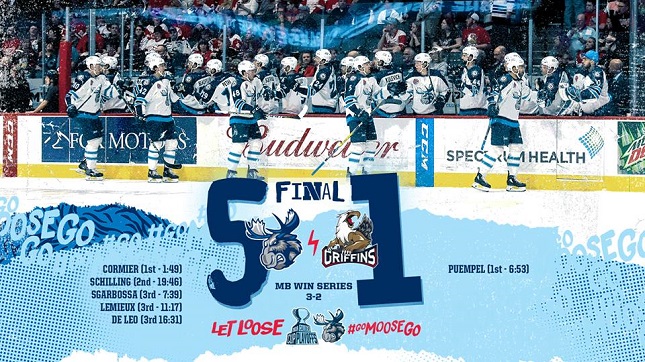 The Manitoba Moose (3-2) and Grand Rapids Griffins (2-3) took to the ice at Van Andel Arena on Monday night to decide a winner in their Central Division Semi-Finals series.  The Moose flew out of the gate, controlling the early play and were rewarded with the opening goal.  Buddy Robinson got the puck ahead for Patrice Cormier who was able to use his extra step on the defender to pull over to the backhand and get around Jared Coreau at the 1:49 mark.  JC Lipon nearly made it 2-0 minutes later when he snagged a loose puck in the slot, but ripped his shot off the post.  Grand Rapids tied things up 6:53 into the game with a power play tally from Matt Puempel.

The second period started out with the Griffins pushing the pace in search of a lead.  The hosts built up a 7-2 lead on the shot clock, but the tide started to turn as the period progressed.  The Moose went on the attack, and outshot the Griffins 11-2 the rest of the frame.  The score stayed locked 1-1 until the final seconds of the period.  Brendan Lemieux found Cameron Schilling sneaking down from the point and the veteran defenceman had a wide open net to deposit the puck into.  Schilling’s second goal of the playoffs sent the Moose to the locker room with a 2-1 lead.

The Moose added some key insurance 6:39 into the third courtesy of a brilliant solo effort from Mike Sgarbossa.  The veteran forward stole the puck away, cut to the front of the net and tucked a shot around Coreau for a 3-1 lead.  The visitors added to their advantage 11:17 into the period when Buddy Robinson slipped a pass out to Brendan Lemieux in front of the goal and Lemieux put it away for a 4-1 advantage.  Grand Rapids emptied the net early, but the gamble didn’t pay off as Chase De Leo iced the contest with Manitoba’s fifth goal of the game.  The Moose cruised to the win from there with Eric Comrie finishing the night making 34 saves in the victory.

The Moose host the Rockford IceHogs to start the Central Division Finals on Friday, May 4 (7 p.m. CT) and Saturday, May 5 (4 p.m. CT).  Tickets for both games go on sale at 10 a.m. tomorrow, Tuesday, May 1, at moosehockey.com/tickets.