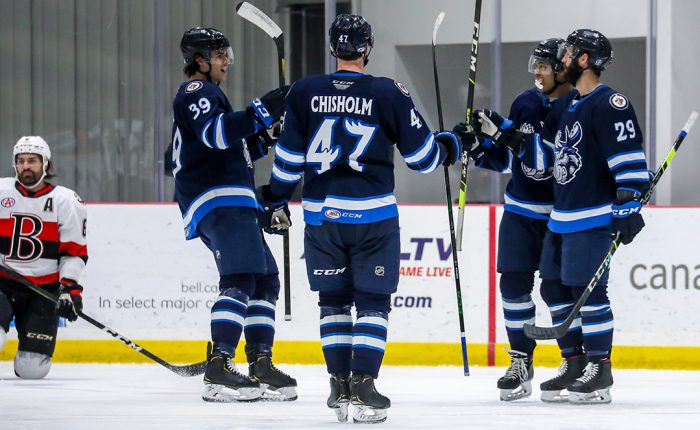 Game Story
The Manitoba Moose (10-11-2-0) were on the winning end of a 3-2 overtime decision against the Belleville Senators (7-11-1-0) on Saturday afternoon at Bell MTS Iceplex. With 9:17 remaining in the period, a tenacious play from Nicholas Jones led to a one-timer opportunity for Cole Maier who capitalized for the 1-0 lead over the Senators. Belleville registered 12 shots during the first frame however Moose netminder Mikhail Berdin kept the Senators off the board.

With 2:12 off the clock of the second period, Vitaly Abramov scored to tie the game 1-1. At 8:04 of the second period, just three seconds into a Moose man advantage, Cole Perfetti found Nathan Todd open in front of Belleville’s net. Todd patiently chose his target and sent a wrist shot past Senators’ netminder Filip Gustavsson and gained the 2-1 lead in favour of the Moose. Belleville earned a power play opportunity of their own with 3:58 remaining in the second period, however Manitoba’s penalty kill rose to the task and killed off the Senators advantage.

At 5:31 of the third period, Curtis Douglas cleaned up Angus Crookshank’s rebound and tied the game at 2-2. Manitoba recorded 10 shots of their own during the third frame, but the contest required overtime to decide a winner. The Moose started overtime down a man as the club had 14 seconds left of a penalty that ran over into extra time. With 27 seconds gone in overtime, Cole Cassels had a chance to end the game, however Mikhail Berdin closed the door on Belleville’s opportunity. Just 24 seconds later, Cole Perfetti sent a slick pass cross-crease that found Jeff Malott speeding down the middle. Malott finished on the one-timer with authority and secured the 3-2 victory for the Moose.

Quotable
Head Coach Pascal Vincent (Click for full interview)
“Those guys are fascinating to watch. They just work and they believe in each other. They are cheering for each other. Again, it shows that, talking about skills and being able to score goals, but having the skill of working hard is one the most important to me. Those guys are reminding a lot of people in this business that hard work pays off.”

Forward Jeff Malott (Click for full interview)
“Unbelievable play by Cole. I mean for his to capitalize on kind of a weird bounce and an unclear bounce with it coming back into the zone and him being able to take advantage of that. It’s a hard play for him to make going into the corner there with three guys all focusing on him and he sends an absolutely insane pass out front so it was pretty easy to finish that one for sure.”

The Moose face the Belleville Senators on Monday, April 12 at Bell MTS Iceplex. Puck drop is scheduled for 4 p.m. The game is available on MooseHockey.com/LISTENLIVE, CJOB.com/sports and AHLTV.com.