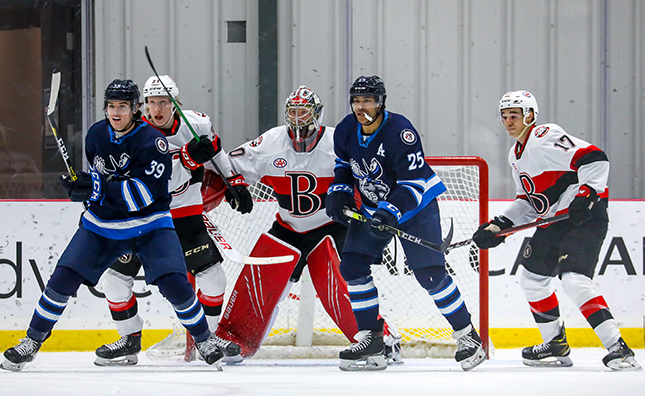 Game Story
The Manitoba Moose (11-11-2-0) earned the 5-1 victory against the Belleville Senators (7-12-1-0) on Monday evening at Bell MTS Iceplex. Manitoba put the pressure on to kick off the contest as the Senators did not register a shot until 10:49 of the frame. With 2:52 remaining in the first period, Nathan Todd showed off his hands and deked his way around Belleville’s defenceman to get to the Senators net. Belleville netminder Filip Gustavsson denied Todd’s initial attempt, however C.J. Suess collected the rebound and gave the Moose a one-goal lead. Just 26 seconds later on a Belleville power play opportunity, Jonathan Aspirot blasted a shot from the blueline that found its way through traffic and tied the game 1-1.

With 5:31 remaining in the second period, Cole Maier found Bobby Lynch streaking up the middle who patiently eyed his target and sent a wrist shot behind Gustavsson to earn the 2-1 advantage for the Moose. Mikhail Berdin got in on the action and marked the secondary assist on Lynch’s goal.

Early in the frame, the Senators were assessed a major penalty and an extra two minutes as the Moose went to a rare seven-minute power play. On the ensuing advantage, Cole Perfetti ripped a shot that went off the post and in to extend Manitoba’s lead to a 3-1 count. With 7:16 gone in the third, while the teams were skating four on four, Perfetti took the shot on a two-on-one and Jeff Malott cleaned up his rebound made the score 4-1 in favour of the Moose. With 5:33 remaining, and the Moose on a late power play, Perfetti found Todd’s rebound in the middle with time to plan his route. The rookie forward toe-dragged his way into the slot and snapped home his second of the contest. The Moose claimed the 5-1 victory earning their third-straight win.

Quotable
Head Coach Pascal Vincent (Click for full interview)
“It was a total team effort for sure but from start to finish. The way we managed those four games against Belleville, I think we got better as the series went on. I really enjoyed our third periods the whole series. We’ve been pretty good the whole year. We have good starts and extremely good third periods, so it was a real good game for us.”

Defenceman Johnathan Kovacevic (Click for full interview)
“I’m really happy and proud of the guys. I think we came in with the right intensity and we maintained it all 60 minutes. There are times bounces go your way or don’t go your way but we had the right mentality the whole way through. When you focus on the process like that, I think you see the results that we get out there.”

What’s Next?
The Moose take on the Stockton Heat on Thursday, April 22 at Bell MTS Iceplex. Puck drop is scheduled for 6 p.m. The game is available on MooseHockey.com/LISTENLIVE, CJOB.com/sports and AHLTV.com.