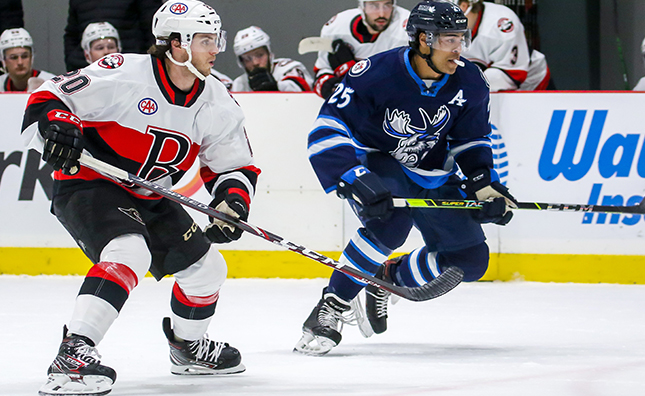 Game Story
The Manitoba Moose (8-11-2-0) dropped a 3-2 contest against the Belleville Senators (7-10-0-0) on Wednesday night at Bell MTS Iceplex. The clubs exchanged four power play opportunities during the first period. With 5:58 remaining in the first frame on a Senators man advantage, Parker Kelly cleaned up Mitchell Hoelscher’s rebound and gained the 1-0 advantage for Belleville.

The Moose outshot the Senators by a 9-5 margin during the second period. With 8.3 seconds left in the frame, Joseph LaBate scored for Belleville and improved the Senators lead to a 2-0 count.

At 3:23 of the third period, Westin Michaud cashed in on Cole Maier’s rebound and made the score 2-1. With 7:10 off the clock in the third frame, Vitaly Abramov made a nice move to get the puck past Moose goaltender Mikhail Berdin to restore the two-goal advantage. Just 24 seconds later, Kristian Reichel snapped a shot from the blue line that Peter Krieger deflected past Belleville netminder Filip Gustavsson to get Manitoba within one. The Moose outshot the Senators 17-1 during the final frame. It wasn’t enough to complete the comeback and Belleville earned the 3-2 win.

Head Coach Pascal Vincent (Click for full interview)
“The second and the third period we played well. Even in the first, it wasn’t a matter of the routes or system it was just a matter of execution and getting the legs going. The one thing that I’m really happy with is we worked on different stuff offensively this week and getting to the net and going to the net and if you look at the shot map of the third period we’re there. It was much better than what we’ve seen.”

Forward Peter Krieger (Click for full interview)
“I think we have to come out faster pace right away, obviously you have be ready for whatever is thrown at you. I think we were a little lax in the first period there. We kind of built as the game went on we had a lot of good chances as the game went on. Ultimately we didn’t capitalize on enough of our opportunities.”

What’s Next?
The Moose face off against the Belleville Senators Thursday night at Bell MTS Iceplex. Puck drop is scheduled for 6 p.m. The game is available on MooseHockey.com/LISTENLIVE, CJOB.com/sports and AHLTV.com.