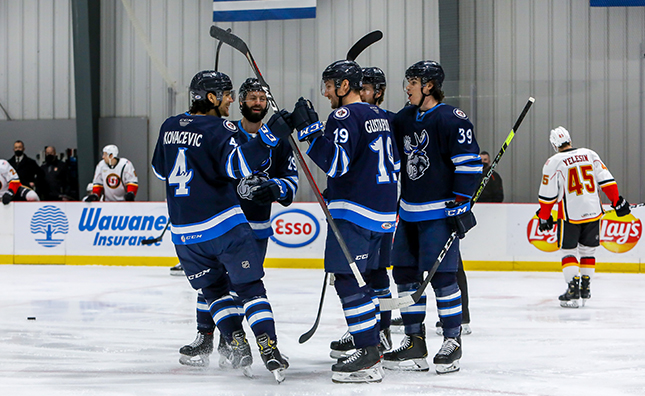 The Manitoba Moose (12-11-2-0) earned their fourth-straight victory with a 5-2 win against the Stockton Heat (10-15-1-0) on Thursday night at Bell MTS Iceplex. Just 45 seconds into the contest, Johnathan Kovacevic blasted a shot from the blueline that found its way through traffic and behind Stockton’s netminder Tyler Parsons which gave the Moose an early 1-0 advantage. Manitoba held the offensive edge during the first period and outshot the Heat by a 12-4 count.

At 58 seconds of the second period, Nathan Todd forced a turnover behind Stockton’s net and found Jeff Malott in front of an open cage who capitalized and extended Manitoba’s lead to 2-0. Just 27 seconds later, Dylan Samberg rushed up the ice and snapped a pass to David Gustafsson who was streaking into the Heat zone. Gustafsson beat his defenceman and flicked a shot into Stockton’s net to make the score 3-0 for Manitoba. The clubs exchanged two-minute minors off the face-off following Gustafsson’s tally resulting in a four-on-four opportunity. Neither team was able to capitalize and the Moose held onto the three-goal lead heading into the third frame.

At 2:02 of the third period, Cole Perfetti rushed into Stockton’s zone and effortlessly glided around a Heat defender. Perfetti made a move cross-crease to get the puck past Parsons and added to Manitoba’s advantage. Just a few minutes later, Glenn Gawdin found a lucky bounce that got Stockton on the board making the score 4-1. With 6:25 remaining in the period on a Moose power play opportunity, Kristian Reichel buried a feed from Nathan Todd and marked a 5-1 score in favour of Manitoba. Just over a minute later, Matthew Phillips added a goal for the Heat on a great redirect in front. Stockton outshot Manitoba 9-4 during the third frame however it wasn’t enough to create a comeback and the Moose posted the 5-2 win.

Quotable
Head Coach Pascal Vincent (Click for full interview)
“Overall special teams were good, we scored on the power play. Penalty kill was really good. We rolled the four lines, shift lengths were good. Intensity was right. We stood up for each other quite a bit. So it was a good game, especially more so after such a long break. Usually the first period is a little bit harder. But I thought tonight our first period was pretty much textbook.”

Forward Kristian Reichel (Click for full interview)
“It’s always rough against these guys. They like to play that kind of style of game, rough and heavy on the forecheck. What I really liked today about our group is we stepped up behind each other. Like if there was some fight or a slash, everybody stepped up for each other and that’s huge for the organization, for us, for the team. That we know if something happens we are there for each other and we are supporting each other.”

What’s Next?
The Moose take on the Stockton Heat on Saturday afternoon. Puck drop is scheduled for 1 p.m. The game is available to on MooseHockey.com/LISTENLIVE, CJOB.com/sports and AHLTV.com.