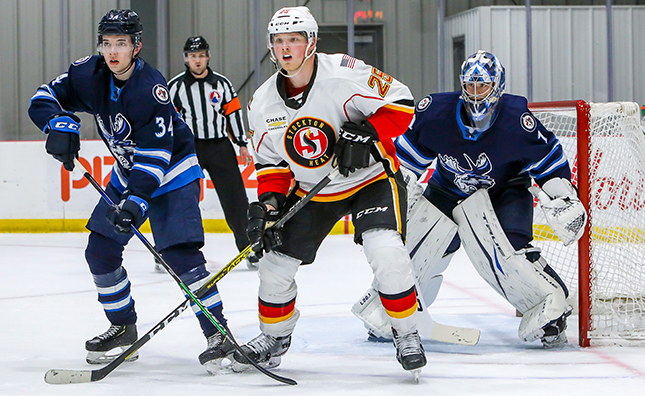 Game Story
The Manitoba Moose (13-11-2-0) collected their fifth-straight victory with a 3-0 win against the Stockton Heat (10-16-1-0) on Saturday afternoon at Bell MTS Iceplex. The Moose didn’t waste any time putting on the pressure and tested the Heat with 17 shots compared to Stockton’s three during the opening period. At 8:10 of the first frame, Cole Perfetti won the faceoff cleanly for a waiting Declan Chisholm. Stockton netminder Garett Sparks denied Chisholm’s attempt however Perfetti was there to clean up the rebound and give the Moose a 1-0 advantage.

The intensity was high during the second frame as the clubs exchanged six penalties during the period, four of which resulted from one sequence. After killing off a late penalty, the Moose added to their lead. With 1:33 to go in the middle frame, Perfetti sent a perfect pass to Dominic Toninato who capitalized on a one-timer opportunity and extended Manitoba’s lead to a 2-0 count.

At 6:52 of the third, Kristian Reichel rushed up the ice and sent a slick cross-ice pass to Perfetti. The centreman connected with Toninato who was rushing up the middle to score his second goal of the game. Comrie stopped all 13 shots he faced and led the Moose to the 3-0 victory. The Moose earned their fifth-straight victory in dominant fashion and outshot the Heat 46-13.

Quotable
Head Coach Pascal Vincent on Eric Comrie (Click for full interview)
“From day one, and I’ve known Eric for quite some years now, and he’s just been a phenomenal person around the team. His work ethic is off the charts, he’s a great teammate, he has great leadership skills and he’s a great goalie. So he’s meant a lot to this organization. I mean the Moose have been around for quite some time now going back to Moose 1.0 and there was quite a few good goalies in Winnipeg playing for the Moose over that time. For him to be the all-time leader tells you quite a bit about his career.”

What’s Next?
The Moose take on the Stockton Heat on Monday afternoon. Puck drop is scheduled for 1 p.m. CT. The game is available on MooseHockey.com/LISTENLIVE, CJOB.com/sports and AHLTV.com.