Recap: Manitoba 2 vs. Stockton 3 SO 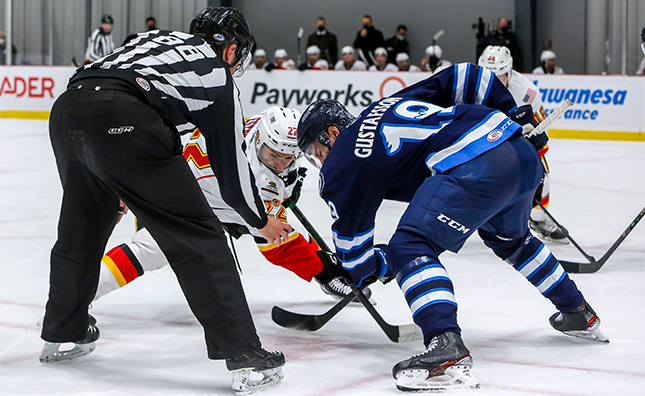 Game Story
The Manitoba Moose (13-11-2-1) were on the losing end of a 3-2 shootout decision against the Stockton Heat (10-15-1-0) on Monday afternoon at Bell MTS Iceplex. The first period was a battle between goaltenders as the clubs exchanged a combined 24 shots during the first period, but neither team found the back of the net. The best chance of the frame came 7:39 into the period when Matthew Phillips cut to the middle with a clear path towards Manitoba’s net. Phillips ripped a shot from close range and Moose netminder Eric Comrie flashed the leather to deny Stockton’s opportunity.

At 6:56 of the second period, on a Moose power play, Cole Perfetti sent a cross-ice pass to Nathan Todd who snapped a shot through traffic and gave Manitoba the one-goal lead.  With 1:13 remaining in the second frame, Stockton’s Adam Ruzicka sniped off the crossbar on a breakaway to tie the game 1-1.

With 8:27 remaining in the third period, Nelson Nogier blasted a shot towards Stockton’s net that Cole Maier deflected past Heat netminder Andrew Shortridge and Manitoba earned the 2-1 lead. With five minutes to go in regulation, Colton Poolman made an impressive pass between his legs to Alexander Yelesin who ripped the one-timer past Comrie, tying the game 2-2. Neither club found the go-ahead goal during the final minutes of the third and the contest needed overtime to decide a winner.

Manitoba registered three shots during extra time however couldn’t find the back of the net. The game went to a shootout where Nathan Todd scored once for Manitoba. Adam Ruzicka and Matthew Phillips both scored for a 3-2 Heat win.

Quotable
Head Coach Pascal Vincent on Johnathan Kovacevic and Dylan Samberg (Click for full interview)
“I think they support each other well. The way they are playing, their style of play, is you have two big bodies and you have two guys that can skate. Kovacevic has improved his skating by a lot and Samberg is a first-year pro but his mind is right, his reads are good. (Kovacevic) has good reads as well. They are really good at this, they are using their sticks and their bodies properly so their gap control is excellent.”

Defenceman Nelson Nogier (Click for full interview)
“When you finally get brought back into this environment and playing games again, you really, you don’t want to take it for granted. But you really appreciate how much and how lucky we are to be able to do what we do. So as I started off with, huge credit goes out to do this group for bringing it every single night. For me to be able to jump in here at this point of the season and then for them to welcome me in with open arms, it’s a really good feeling.”

What’s Next?
The Moose take on the Stockton Heat Thursday night at Bell MTS Iceplex. Puck drop is scheduled for 6 p.m. The game is available on MooseHockey.com/LISTENLIVE, CJOB.com/sports and AHLTV.com.