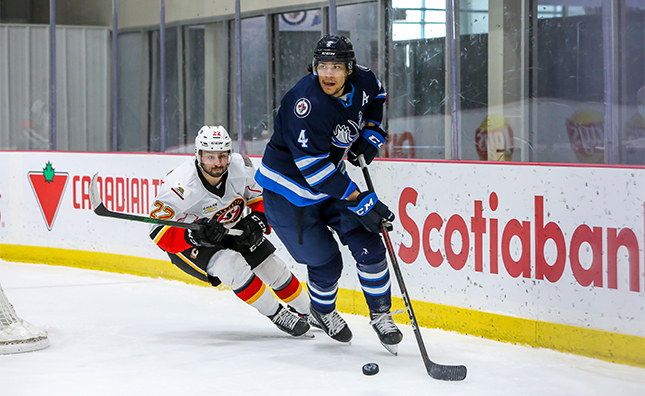 Game Story
The Manitoba Moose (14-11-2-1) claimed a 3-1 victory against the Stockton Heat (11-17-1-0) on Tuesday night at Bell MTS Iceplex. Stockton saw an early chance to get on the board on a five-on-three power play opportunity lasting 1:20 just over two minutes into the contest. Manitoba’s defensive group rose to the occasion and killed off the man-advantage. Dylan Samberg stood out and made consecutive blocks on Stockton’s opportunity and kept the Heat from finding the back of the net. With 4:04 remaining in the opening frame, Johnathan Kovacevic snapped a wrist-shot past Stockton’s netminder Garret Sparks and Manitoba gained the 1-0 lead.

Just 36 seconds into the middle frame, Cole Perfetti flipped a backhand pass to Dominic Toninato streaking down the middle. Sparks stopped Toninato’s first attempt however the centreman found his own rebound mid-air and extended Manitoba’s lead to 2-0. With 9:32 remaining in the second period, Emilio Pettersen scored a beautiful goal on a breakaway opportunity and brought the Heat within one heading into the final frame.

Stockton outshot the Moose 9-5 during the third in hopes of finding the equalizer. With 2:10 remaining in the game, David Gustafsson found Stockton’s empty net and secured Manitoba’s 3-1 victory. With the Moose posting the win, the club has recorded a point in seven-straight games.

Quotable
Head Coach Pascal Vincent on Johnathan Kovacevic (Click for full interview)
“He’s been excellent all year. He’s getting those chances in the offensive zone because he’s killing a lot of plays in the neutral zone and he’s making smart decisions with the puck. He’s got a pretty good shot and he works at it hard in practices. He’s gotten more and more poised with the puck, we saw it when they had the empty-net goal. He had the puck in the neutral zone and he made a nice play to keep the puck, not to throw it away.”

Moose Defenceman Johnathan Kovacevic (Click for full interview)
“They’re trying to counter some of the things that we are kind of planning for. Hats off to them, it’s been working and that’s why we have such competitive games. It’s nice, we’ve kind of… we are a young team and then kind of throughout the year we’ve built ourselves an identity. Now I think in one-goal games like that at the end we know who we are and we are confident we can come away with a win.”

What’s Next?
The Moose face the Stockton Heat on Thursday at Bell MTS Iceplex, the final contest of Manitoba’s 17-game home stand. Puck drop is scheduled for 4 p.m. The game is available on MooseHockey.com/LISTENLIVE, CJOB.com/sports and AHLTV.com.