Recap: Moose 2 at Cleveland 3 SO 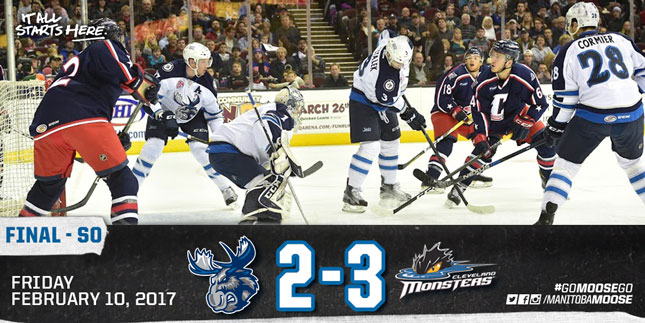 Game Story
The Manitoba Moose (18-23-3-3) made their first visit to Quicken Loans Arena this season to take on the Cleveland Monsters (23-18-2-3) on Friday night.  The Moose got on the attack quickly, carrying the play and outshooting the Monsters 4-1 until a parade to the penalty box broke up the five-on-five play.  Cleveland took advantage of one of their three chances with the man-advantage as Markus Hannikainen broke into the zone and snapped a shot by Eric Comrie at 11:37 of the period.  The Moose weren’t able to even things up on any of their three powerplay chances, but found an even strength equalizer late.  Patrice Cormier jammed home a rebound to get the Moose on even footing with 18.2 seconds left in the first.  Despite outshooting Cleveland 13-7, the Moose exited the period tied 1-1 with the Monsters.

The Moose stayed hot in the early stages of the second frame.  Cormier gave Manitoba its first lead with his second of the night 3:58 into the period.  JC Lipon set up the Moose captain with a perfect feed off the rush and Cormier was able to redirect the puck past Joonas Korpisalo.  Manitoba couldn’t build on the lead and Cleveland tied the game 11 minutes in.  Dillon Heatherington snuck in on the rush and made a slick move to the backhand for his first of the season.  The Moose penalty kill came up big late in the second, stopping two Cleveland powerplays in the final five minutes to reach the break tied 2-2.

Despite numerous chances, neither team was able to find twine in the third.  Comrie made eight stops in the frame while Manitoba pumped 13 shots toward Korpisalo.  With moments left on the clock, the Moose manufactured two quick scoring chances, but the teams were destined for overtime.  In extra time, both teams had some great looks, but saw the pucks whistle wide on their best chances.  Cleveland outshot Manitoba 3-1 in overtime.  In the shootout, Kyle Connor tallied for the Moose, but Oliver Bjorkstrand and Daniel Zaar scored for the Monsters as Cleveland took the 3-2 win.

What’s Next?
The Moose and Monsters take tomorrow off game action before their rematch Sunday afternoon in a 2 p.m. CT puck drop.  Tune in to the action on TSN 1290 and moosehockey.com/listenlive beginning 15 minutes before game time.