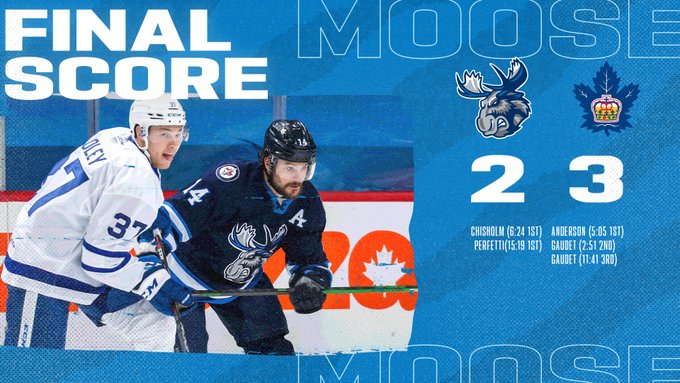 Quick Hits
Game Story
The Manitoba Moose (0-1-0-0) lost in a 3-2 decision against the Toronto Marlies (1-0-0-0) on Monday night at Bell MTS Place. Joey Anderson notched the first goal of the game for the Marlies with just over five minutes gone in the first period. Barely over a minute later, Declan Chisholm ripped a shot through traffic and found the back of the net for his first pro goal to tie the game. Johnathan Kovacevic and Joona Luoto were later credited with the assists on Chisholm’s tally. With about four minutes remaining in the frame, Cole Perfetti cleaned up Bobby Lynch’s chance and scored his first career AHL goal to give the Moose a one-goal advantage. To close out the frame, Mikhail Berdin made a highlight reel save to hold Manitoba’s lead.
Early the second period, Tyler Gaudet tied the game with help from Timothy Liljegren and Hudson Elynuik. With six minutes remaining, the Moose were tested on their first penalty kill of the season. No damage was done and the game stayed tied at two heading into the third period.
Intensity grew in the third and the clubs exchanged six penalties throughout the frame. Midway through the period, Tyler Gaudet scored his second of the night and notched the eventual game-winning goal with assists from Joseph Duszak and Rourke Chartier. Mikhail Berdin stopped 32 shots on the evening, but it wouldn’t be enough as the Marlies skated to a 3-2 victory.
Statbook

On having a young core and the success of Perfetti and Chisholm in tonight’s matchup:

“That’s the reason of our existence. Having young guys and to be able to play them. That’s what we do. At the end of the game and we have those young guys on the ice and we have Perfetti on a six-on-five, we put them in all situations, power play, penalty kill, that’s why we exist. We want to give them as much mileage as possible in order to help them grow. A pro-hockey game is different, it takes a 60 minute effort. It goes faster, you’re playing against men, and the more you do it you get used to it. To us, it’s really exciting to have so many young players. On defence, we talk about the age but the skills are there, they can play. They can make plays. They had real good breakouts, the gap was right very often, we need to improve there’s no doubt but I think they did well in their first game.”

On scoring his first pro goal in his AHL debut

“It was a great experience. Playing your first is something special, so much to learn from tonight. It was a lot of fun going out there and competing against those guys and playing with the guys we were with. I had a great experience. To score in the first game and get the first one our of the way, definitely feels good and takes the pressure off a little bit. The pace of the game was a step up and it’s so good for my development and it was an unbelievable experience and I can’t wait to get going tomorrow night.”

The Moose take on the Marlies tomorrow night at Bell MTS Place. Puck drop is scheduled for 7 p.m. CT. The game is available to watch on moosehockey.com/listen and CJOB.com/sports. The game is also available on AHLTV.com.