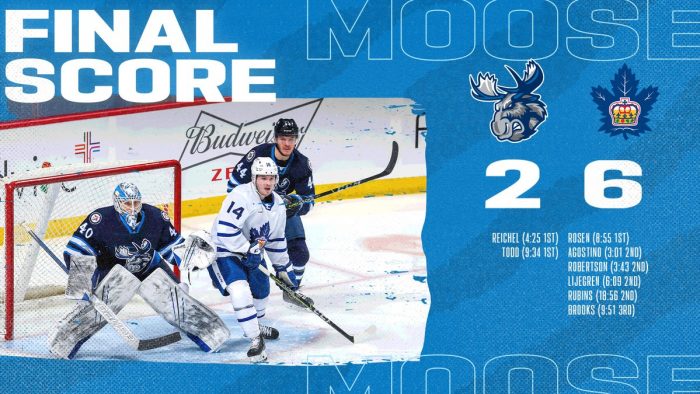 The Manitoba Moose (0-2-0-0) were defeated 6-2 by the Toronto Marlies (2-0-0-0) on Tuesday night at Bell MTS Place. The Moose struck first, 4:25 into the game, as Kristian Reichel was in the right place at the right time and capitalized on C.J. Suess’ rebound. With 8:55 gone in the first frame, Calle Rosen scored for the Marlies and tied the game at one a piece. Just over 30 seconds later, Manitoba answered as Tyler Graovac’s shot was deflected to Nathan Todd who sent a one-timer past Marlies netminder Andrew D’Agostini to give Manitoba the 2-1 lead.

The Marlies took control of the game during the second period and didn’t let up. With 3:01 off the clock, Calle Rosen scored for Toronto and tied the game 2-2. Less than a minute later, Nick Robertson notched his first AHL goal, giving the Marlies the 3-2 advantage. At 6:09, Rosen’s second tally of the game improved Toronto’s lead to a two-goal margin. Manitoba had a standout chance with Cole Perfetti being open for a one-timer, but the centreman’s shot rang off the goal post. With just over a minute remaining in the period, Kristians Rubins scored to make the score 5-2.

D’Agostini opened the period by making a pair of key saves off Reichel to hold the margin to three. Midway through the third period, Adam Brooks capitalized on a power play chance to push the lead to four. The Marlies defence held the Moose to six shots in the final frame as Toronto cruised to the 6-2 win.

“Kristian is a guy that since day one we know what to expect. He shows up at the rink every single day and he’s a real good pro. There’s a reason why he wears a letter on his jersey, it’s because he brings that energy to every single and every shift. He doesn’t take a shift off, he’s on the puck, shooting pucks, scored a nice goal tonight with the effort of back-side pressure and re-attacking the net. He’s a guy that trust.”

“We’ll need to stay focused for a full 60 minutes. We didn’t handle that much in the second period. We were kind of on our heels and they capitalized on their chances. It’s tough for sure but when that happens we need to pick it up. We had a few good shifts there but we didn’t capitalize. It was tough but we need to bounce back on Thursday.”

What’s Next?
The Moose take on the Toronto Marlies on Thursday night at Bell MTS Place. Puck drop is scheduled for 6 p.m. CT. The game is available on moosehockey.com/listenlive, CJOB.com/sports and AHLTV.com.