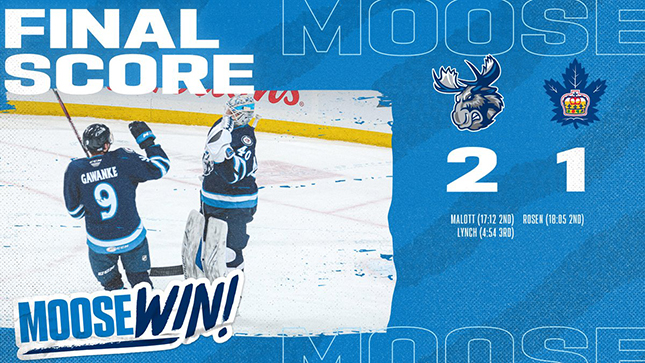 The Manitoba Moose (2-2-0-0) secured the 2-1 victory against the Toronto Marlies (2-2-0-0) on Friday evening at Bell MTS Place. The Marlies earned two power play opportunities during the first period however Manitoba killed off both chances. Toronto tested Mikhail Berdin with 12 shots, but the netminder stood tall and kept the first period scoreless.

With just under three minutes remaining in the second period, Jeff Malott ripped an impressive shot from down low and gave the Moose the one-goal lead. Westin Michaud marked his first AHL assist on Malott’s tally while Trent Bourque added his second helper in as many games. Under a minute later, Calle Rosen sent a wrist shot from the top of the circle past Berdin and tied the game at one a piece.

At 4:54 in the third period, Tyler Graovac sent a behind-the-back pass to Bobby Lynch who created space and flipped a backhand shot past Marlies goaltender Andrew D’Agostini. Berdin continued to hold fast as time wound down, finishing the night with 38 saves and leading the Moose to a 2-1 win.

“The guys are paying attention to the small details we’re talking about and they work hard. It’s a good group. They buy in, they work hard and they gelled pretty quick and we saw it from day one at training camp.”

“The Moose have really opened up their arms for me and been really supportive. I really want to thank the coaching staff for allowing me to play my style of game. I know it’s a development league and it can be tough. You want to kind of establish a foundation for these young guys about, not playing robotic, but a lot of getting pucks in. They’re allowing be creative and I think that’s something that’s always helped me succeed in my game, and they’re allowing me to find my game again.”

The Moose hit the road and kick off their four-game series against the Laval Rocket, Monday, Feb. 22/21. Puck drop is scheduled for 7 p.m. CT. The game is available to watch on CJOB.com/sports, MooseHockey.com/LISTENLIVE  and AHLTV.com.