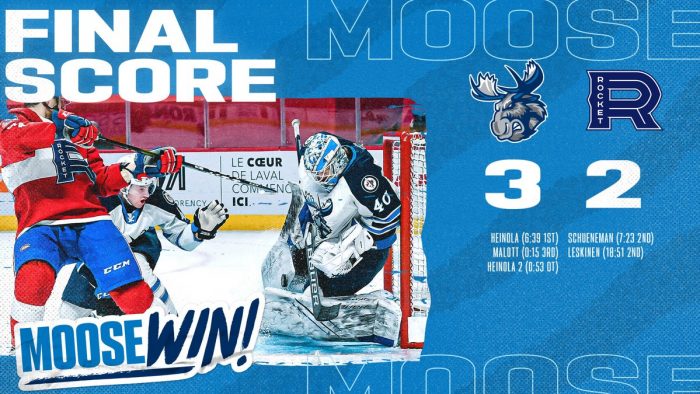 The Manitoba Moose (3-2-0-0) were on the winning end of a 3-2 overtime decision against the Laval Rocket (3-1-1-0) on Monday night at Bell Centre in Montreal, Que. With 6:42 off the clock, Jesse Ylonen tried to send the puck around the boards however missed his target and sent a shot into his own net. Ville Heinola was credited with the unassisted goal and marked his first career AHL tally. The Moose were awarded two power play opportunities during the period but were unable to capitalize.

Just 15 seconds into the third period, Jeff Malott tracked down a bouncing puck and blasted a shot past Laval netminder Vasily Demchenko tying the game at two. Both clubs saw high-chance opportunities to get the go-ahead goal during the third period. With 4:55 remaining, Cole Perfetti found Leon Gawanke open in front of the net and the German defender appeared to have scored, but Gawanke’s attempt was ruled no goal. The clubs stayed tied in regulation and the contest required extra time to decide a winner.

The Moose were up a man during overtime as Kevin Lynch was still sitting for a tripping called late in the third period. Just 53 seconds into extra time, Cole Perfetti set up Heinola for a one-timer and the defenceman ripped a shot to the back of the net to stamp Manitoba’s 3-2 victory.

“I had no idea what we were doing, if I’m being honest with you. I just, like, we have to be creative with our (power play) and, you know, make those plays and shoot the puck. And that one went in, so that’s good.”

The Moose will face against the Laval Rocket on Wednesday night. Puck drop is scheduled for 6 p.m. CT. The game is available to watch on MooseHockey.com/LISTENLIVE, CJOB.com/sports and AHLTV.com.