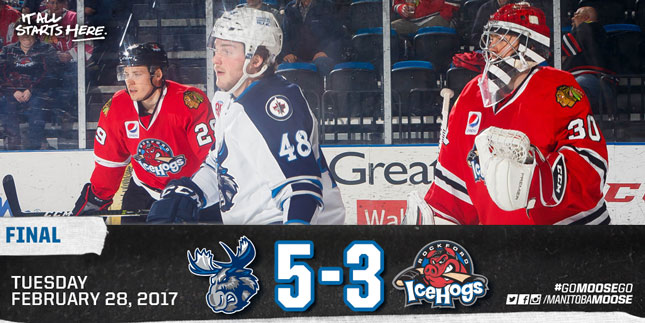 Game Story
The Manitoba Moose (22-27-3-4) took on the Rockford IceHogs (21-27-8-3) for the third time in five games on Tuesday night in Rockford.  In a rare night off for Eric Comrie, Jamie Phillips got his second start since being recalled by the Moose.  The first year pro looked sharp, making 13 saves in the opening period.  One puck got past him, but the play was called back on a high stick from Rockford.  The Moose got their offence rolling late in the period.  After creating a turnover in the neutral zone, Manitoba worked the puck to Peter Stoykewych whose wrist shot squeezed past Lars Johansson with 4:28 left in the period.  Just 2:24 later, Kyle Connor snagged a rebound in front of the goal and tucked the puck in on the backhand to send the Moose into the second with a 2-0 lead.

The Moose picked up right where they left off, adding to their lead early.  Patrice Cormier drove to the net on the powerplay and Dan DeSalvo was able to get Cormier’s rebound to go across the line 3:36 into the period.  The goal prompted a goaltending switch with Jeff Glass coming into the game.  Moments after the switch, Spencer Abbott stole the puck at the Rockford blue-line, raced in alone and made a slick move to get the IceHogs on the board.  As the period went on, a parade to the penalty box ensued.  At one point, the teams played 3-on-3 before the Moose went to a 5-on-3 powerplay, only to see the tables turn and Rockford head to a two-man advantage with no even strength time in between.  The IceHogs tallied on the opportunity with Ville Pokka striking at 15:05.  Immediately after the goal, the Moose were back down two men.  When Quinton Howden got out of the box he was sprung on a break, but hauled down and awarded a penalty shot.  The Oakbank, MB product went in with speed, but was denied on a quick wrister by Glass to leave the Moose up 3-2 after 40 minutes.

The hosts tied the game 6:52 into the third.  Vinni Hinostroza drew eyes down-low before centering for Erik Gustafsson who picked his spot on the net to beat Phillips and even the score, 3-3.  Manitoba restored its advantage just ahead of the 10 minute mark.  Connor raced in on a two-on-one with Brendan Lemieux and made a perfect pass to Lemieux who ripped a one-timer for the go ahead goal.  With time winding down, Rockford vacated their net in favour of the extra attacker.  The gamble didn’t pay off as Brian Strait flipped the puck from deep in the Moose zone and hit the middle of the open goal to send Manitoba to its third straight win by a 5-3 score.

What’s Next?
The Moose and IceHogs clash yet again on Friday night in a 7 p.m. CT matchup.  Tune in to the action on moosehockey.com/listenlive starting 15 minutes before puck drop.