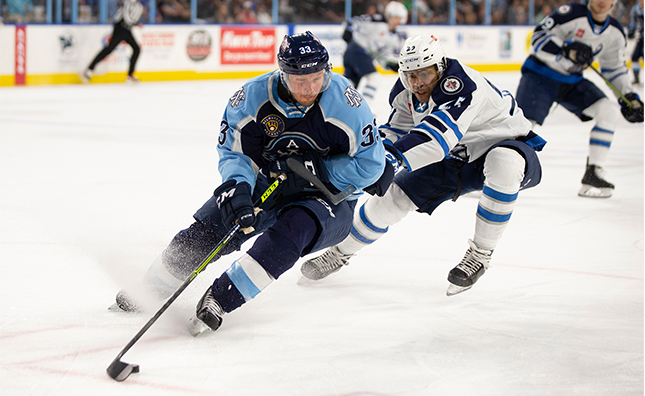 The Manitoba Moose (0-2) skated in game two of their Central Division Semifinals series against the Milwaukee Admirals (2-0) Saturday evening at UW-M Panther Arena.

Both Manitoba and Milwaukee battled to a scoreless draw after the opening 20 minutes of play. The Moose were granted the only chance on the man-advantage, but were unable to find twine. The visiting Moose and home side Admirals both had a couple decent scoring chances as the period wound down, but neither side was able to do any significant damage. Mikhail Berdin ended the first period with six saves, while at the other end of the ice, Devin Cooley finished with nine of his own.

The deadlock continued between the Moose and Admirals through 40 minutes. Manitoba had the best chances and were able to work on a pair of second period power play opportunities. Admirals netminder Cooley was excellent and continued to stymie the Moose attack. Manitoba fired 22 shots on goal in the middle frame, but were unable to score. Despite outshooting Milwaukee 31-9, the clubs were tied 0-0 heading into the final 20 minutes of play.

Milwaukee opened the scoring in the third. Jimmy Huntington snuck behind the Moose defence and tipped a redirected pass past Berdin just 2:10 into the final stanza to push Milwaukee ahead 1-0. The Moose needed a goal and pulled Berdin in favour of the extra attacker in the final two minutes. Declan Chisholm got the puck to Morgan Barron. The forward fired a hard shot over the arm of Cooley to tie the contest 1-1. Jimmy Huntington replied seconds later to put the Admirals ahead 2-1 with 46 seconds remaining in regulation. Manitoba couldn’t manufacture any further offence and fell 2-1 in the second game of the series. Berdin ended the night with 14 saves and was tagged with the loss. Cooley captured the win and finished with 43 stops of his own.

“We’ve had over 80 shots on net and we need to find a way to be better at finding rebounds and creating more rebounds. To be honest, we had 42 or something here tonight, but it felt like a lot (Cooley) hung onto them. He’s seeing them and he’s holding them, there’s no dirty pucks in the crease to find. There are things we’re going to have to do to create those. ”

You can catch the game on 680 CJOB, CJOB.com/sports, the Manitoba Moose App and AHLTV.