Recap: Manitoba 2 at Grand Rapids 1 SO 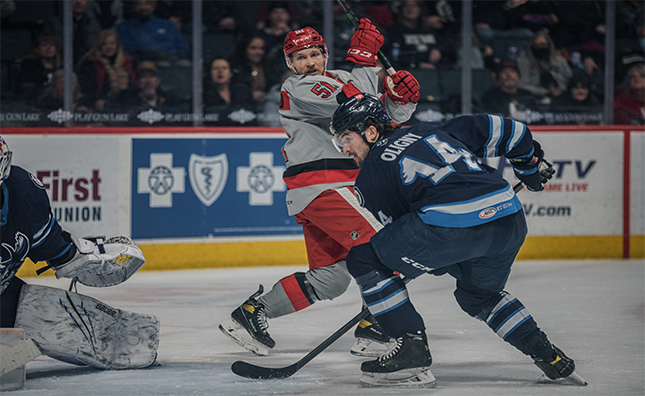 The Manitoba Moose (20-9-2-1) faced off against the Grand Rapids Griffins (14-11-4-2) for a Saturday night rematch at Van Andel Arena. The Moose were coming off a 3-2 overtime loss against the Griffins the previous night.

The Moose and Griffins fought to a 0-0 draw at the close of the first period. Both Manitoba and Grand Rapids had multiple opportunities to open the scoring on the man advantage, but Arvid Holm and Calvin Pickard were both up to task and shut down every chance they both faced. The Central Division foes also both found iron and hit the post in the opening 20 minutes. Holm ended the frame with five total saves, while Pickard finished the period with nine of his own.

The strong defensive play by both the Moose and Griffins led to a goalless middle frame. The Moose fell into some penalty trouble, but Holm, who was making his first start since Dec. 17, came up with a multitude of huge saves to keep the game tied. The Swedish goaltender ended the frame with an additional eight saves to his credit. Pickard made six stops of his own for the hometown Griffins.

The final frame saw the Griffins open the scoring. The Moose, who were penalized four consecutive times to open the third, found themselves on a lengthy five-on-three kill. After a wonderful pair of saves from Holm, Taro Hirose finally got a shot through for the 1-0 Griffins lead. The Moose didn’t trail for long as Leon Gawanke evened the game halfway through the period. The defenceman leaned into a shot and rocketed the disc past Pickard for the equalizer. Both squads pushed for the winner the rest of the way, but the horned sounded and sent the contest into overtime.

The Moose and Griffins both received power plays in the extra frame, but the netminders pushed the game into a shootout. Kyle Criscuolo gave the Griffins the early lead, but Todd Burgess and Luke Johnson both scored to give Manitoba the edge. Hirose tried to extend the contest, but Holm made the save to seal the 2-1 Moose win. Holm finished with 27 saves and the victory while Pickard took the loss and made 24 stops of his own.

The Moose finish their road swing with a date in Iowa against the Wild on Wednesday, Jan. 19. Puck drop is scheduled for 7 p.m. CT. Catch the game on CJOB.com/sports, the Manitoba Moose App and AHLTV.