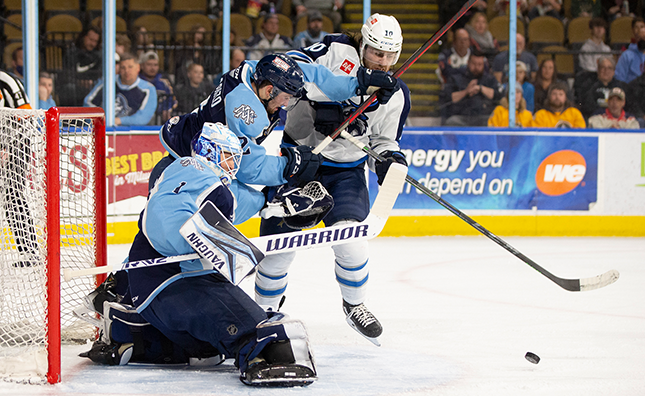 Both Manitoba and Milwaukee battled to a goalless draw after the opening 20 minutes of play. Each side was granted a chance on the man-advantage as the period wore on, but neither squad found twine. The best chances of the frame came off the sticks of both Jimmy Huntington and Leon Gawanke, who each hit iron. Mikhail Berdin ended the first period with six saves, while at the other end of the ice, Devin Cooley finished with 10 of his own.

Milwaukee opened the scoring with less than five to go in the second. Tommy Novak gathered up the puck and spun the disc towards the front of the net. Brayden Burke found the rebound and beat Berdin with a low, quick shot to give the Admirals a 1-0 lead. The Moose tied the contest less than two minutes later. Declan Chisholm gathered the puck at the blue line and fired a shot on goal. C.J. Suess got the tip in front and sent the puck past Cooley to knot the game up 1-1. Milwaukee found itself on a late power play and used it to full advantage. Matt Donovan’s shot from the point got through and pushed the Admirals ahead 2-1 with less than one second left in the frame. Manitoba trailed 2-1 after 40 minutes despite outshooting Milwaukee 17-8 in the middle frame.

Manitoba tied the contest less than a minute into the third. Cole Maier won an offensive zone draw back to Chisholm who wired a hard shot under the glove of Cooley to tie the contest 2-2. Milwaukee regained the lead with four minutes to play as Cole Schneider finished off a two-on-one with Novak. Manitoba pulled Berdin late in favour of the extra attacker but were unable to solve Cooley for the tying marker. Manitoba fell by a final score of 3-2 in the opening game of the best-of-five series. Berdin ended the night with 18 saves and was tagged with the loss. Cooley captured the win and finished with 40 stops of his own.

“I think we just have to turn the page. Look towards next game. We dominated them all game. Hammered them with shots all game. I think we were in the o-zone most of the game too. If we bring that effort every night, I think the series will go our way. ”

The Moose return to the ice tomorrow for Game Two of the series on Saturday, May 7. Puck drop is scheduled for 6:00 p.m. CT at UW-M Panther Arena. You can catch the game on 680 CJOB, CJOB.com/sports, the Manitoba Moose App and AHLTV.

2022 Calder Cup Playoff ticket packages, which guarantee your seats for all Manitoba Moose home games, are available at MooseHockey.com/PLAYOFFS.