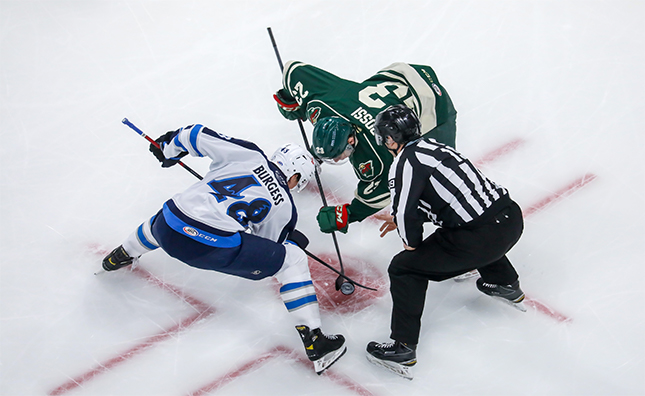 The Moose got the scoring started exactly 90 seconds into the opening frame. Declan Chisholm fired a shot from distance that eluded Iowa netminder Trevin Kozlowski and gave the Moose a 1-0 early lead. Despite power play chances for either side, no further scoring would be done in the first period for a 1-0 Moose lead. Evan Cormier, who was making his Moose debut, was perfect for Manitoba with seven saves while Kozlowski ended the frame with six of his own.

The Moose opened the scoring in the middle frame with a goal from Todd Burgess. Mikey Eyssimont worked his way free and slid the puck from behind the net into the slot for Burgess. The forward quickly fired off a hard shot that extended the Manitoba lead to 2-0 in the first five minutes of action. Iowa countered and cut the Moose lead in half with a five-on-three power play marker from Matt Boldy at 12:48. The Wild outshot the Moose 14-11 in the middle frame, but Manitoba took a 2-1 lead into the dressing room after 40 minutes of play.

The third period saw the Moose attempting to add to their lead, while the Wild pushed to even the score. Neither mission was accomplished, as the frame ended without any goals being given up. The Moose had the edge in shots in the final stanza by a 12-9 count. The final horn sounded with Manitoba capturing a 2-1 win. Cormier recorded his first Moose win with a 29-save performance, while Kozlowski ended the night with the loss and 28 stops of his own.

“(Cormier) was fantastic this afternoon. When we started the game he made some big saves. He gave us confidence. When you have a goalie playing like that, it’s pretty easy to help him out. He was unbelievable on short notice. Super grateful to have him.”

The Moose rematch against the Iowa Wild on Tuesday, Jan. 4. Puck drop is scheduled for 7 p.m. CT. Catch the game on CJOB.com/sports, Manitoba Moose App and AHLTV.