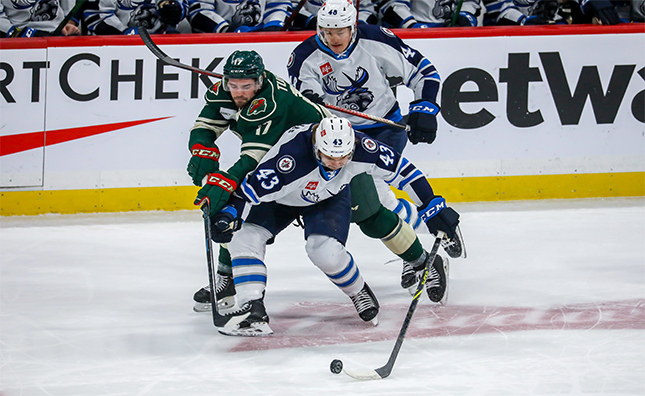 The Moose got the scoring started for the second straight contest. With Manitoba on the man advantage, Ville Heinola gained the offensive blueline and flipped the puck to Jeff Malott in the slot. The forward fired a shot that went up and over the left shoulder of Trevin Kozlowski for a 1-0 Moose lead. Iowa tied it up with under five to play with a goal from Kris Bennett. The shot from the blueline redirected numerous times including a touch from Bennett as the puck got around Evan Cormier for the 1-1 tie. Cormier finished out the frame with six saves, while Kozlowski ended with 13 of his own.

The Wild opened the scoring in the middle frame with a goal from Adam Beckman. The forward tipped a Riese Zmolek point shot past Cormier for the 2-1 Iowa lead. The rest of the frame was split between the two sides trading chances but not finding twine. The Wild outshot the Moose 13-10 in the middle frame and would head to their dressing room with the 2-1 lead after 40 minutes of play.

The third period saw the Moose looking for the equalizer. It came in the form of a shot from Johnathan Kovacevic. The defenceman’s sixth of the season tied the game 2-2 just about halfway through the period. Time ticked down and the horn sounded to end regulation with the squads in a deadlock. Overtime was a busy affair that saw the teams combine for numerous chances and plenty of shots. Both netminders were solid and the game was extended into the shootout. Eyssimont and Austin Poganksi were denied by Kozlowski, while Beckman and Kyle Rau scored to give the Wild a 3-2 shootout victory. Cormier ended the night with 23 saves, while Kozlowski recorded 35 and the win.

“I think we got away from our game a bit there in the second. We were trying to do too much and not playing as a five-man unit.When we get away from our game, that’s when bad things happen. We’ve had games where we’ve been down a goal going into the third and we’re able to just continue to play our game and it ends up working out for us. We got to overtime and they beat us in the shootout.”

The Moose hit the road and face off against the Texas Stars on Friday, Jan. 7. Puck drop is scheduled for 7 p.m. CT. Catch the game on CJOB.com/sports, Manitoba Moose App and AHLTV.