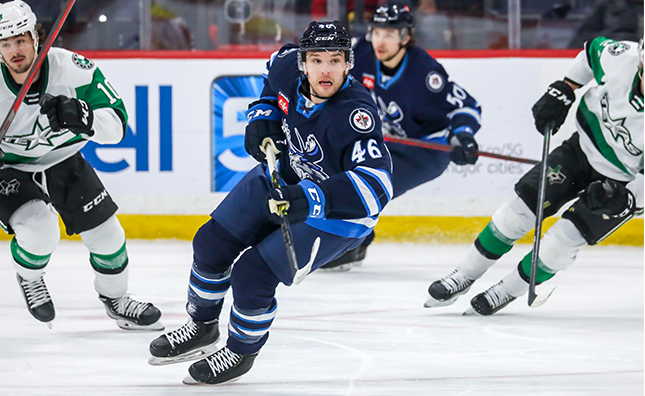 Manitoba opened the scoring 1:26 into the first period. Bobby Lynch threw the puck around the boards before the disc ricocheted to Daniel Torgersson. The forward gathered up the loose puck and deftly lifted a quick shot past Matt Murray for the 1-0 Moose lead. Texas tied the contest with just under three minutes to play in the first. Jordan Kawaguchi threw the puck on net and the disc bounced partially off a Moose skater in front and Curtis McKenzie knocked it to the back of the net to tie the game. The horn sounded to draw the frame to a close. Holm recorded 12 stops for Manitoba, while Murray finished with seven for the visiting Stars.

Manitoba restored its lead in the second with a goal from Thomas Caron. Ville Heinola sent the puck to Dean Stewart who blasted the disc on net. The puck hit Caron in front and found its way to the back of the net for the 2-1 Moose lead. Manitoba fell into penalty trouble late in the second and Texas took advantage. With a pair of Moose in the penalty box, Ben Gleason fired a hard shot past Holm to tie the contest 2-2. Both sides recorded 13 shots on net in the middle stanza, as the two clubs took a 2-2 tie into the second intermission.

Texas broke the deadlock in the third period with a power play goal from Anthony Louis. The forward’s 23rd tally of the season gave the Stars a 3-2 lead with eight minutes left. Louis tacked on his second of the night four minutes later to push Texas ahead 4-2. That was all the offence in the frame, as the Moose fell 4-2 on the evening. Holm was tagged with the loss and ended the night with 29 saves, while Murray captured the win with 31 stops of his own.

The Moose clash with the Abbotsford Canucks on Thursday, April 28. Puck drop is scheduled for 7:00 p.m. CT at Canada Life Centre.