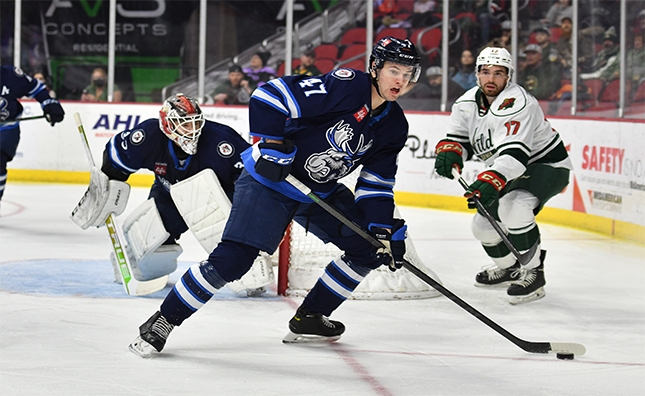 The Manitoba Moose (20-10-2-1) faced off against the Iowa Wild (15-14-2-2) to finish their six-game road trip with a Wednesday night tilt. The Moose were coming off a 2-1 shootout win over the Griffins this past Saturday.

The Moose opened the scoring in the first period. With Manitoba pressing in the offensive zone, the puck squirted free to the high slot. Simon Lundmark got a stick on the disc and sent it on net where Matt Alfaro tipped it home. It was the forward’s first AHL goal and gave the Moose a 1-0 lead. With seven seconds left in the frame, the Moose struck again. Greg Meireles passed the puck to the trailing Jimmy Oligny. The defenceman whipped a quick shot through the wickets of Zane McIntyre for a 2-0 Manitoba lead. Evan Cormier finished the first with eight saves while McIntyre ended the frame with seven of his own.

The second frame saw the Wild on the power play midway through the period.  A near chance had to be reviewed before it was officially determined that the puck hit the crossbar. That kept the Moose ahead 2-0. Iowa kept up the pressure and later cut into the Moose lead with under four to go in the middle period. Mason Shaw sent a backhand into the open net that made it 2-1 for Manitoba. The Moose fired back with a push with under a minute left and were rewarded with a goal from Haralds Egle off a point shot from Lundmark. The Moose took a 3-1 lead into the dressing room after 40 minutes of play. Cormier made 12 stops in the middle frame with McIntyre ending with eight for the hometown Wild.

The final frame saw the Wild cut into the Moose lead once again. Shaw got the final touch and found twine for his second of the game. Iowa pressured and struck for the equalizer less than two minutes later as Kyle Rau made it 3-3. The Wild added another tally and pulled ahead with 31.4 seconds left in the frame as Shaw completed the hat-trick. Manitoba pulled Cormier in favour of the extra attacker, but was unable to get any traction and fell in regulation 4-3. Cormier ended the night with 28 saves in the loss. McIntyre captured the win and had 21 stops of his own.

The Moose head home and clash with the Chicago Wolves on Saturday, Jan. 22. Puck drop is scheduled for 2 p.m. CT at Canada Life Centre. Tickets are available at MooseHockey.com. You can catch the game on CJOB.com/sports, the Manitoba Moose App and AHLTV.