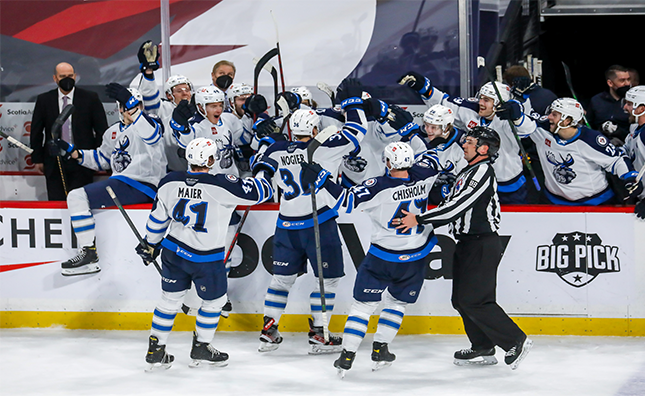 The Manitoba Moose (22-10-2-1) faced off against the Chicago Wolves (24-7-3-1) for a rematch at Canada Life Centre. The Moose were coming off a 4-3 overtime win over the Wolves the previous day.

The Wolves opened the scoring late in the first period. A shot from the point bounced out into the slot and straight to the waiting stick of David Cotton. The forward quickly fired it past Moose netminder Philippe Desrosiers for the 1-0 Wolves lead. Manitoba, who had two power plays in the first, was unable to solve Alex Lyon through the first 20 minutes. Desrosiers ended the first with 17 saves for the Moose while Lyon registered 10 of his own.

The second frame saw the Moose even up the score with a goal from Johnathan Kovacevic. The defenceman grabbed the puck off a broken play at the offensive blueline, skated around a diving Wolves player and wired his seventh of the season past Lyon for the 1-1 equalizer. That would be all the scoring in the middle frame as Desrosiers and Lyon were solid the rest of the way for their respective squads. Desrosiers registered 29 saves through 40 minutes while Lyon recorded 13.

The final period saw the Moose grab the go-ahead goal off the stick of Nelson Nogier. The forward made a slick move in front of the net and sent his own rebound past Lyon for his first of the season and a 2-1 Moose lead near the halfway point of the period. The Wolves rallied late and pulled Lyon in favour of an extra attacker, however, Nogier got the puck and cleared it down the ice into the empty net for some much-needed insurance. His second of the game with 18 seconds left sealed the Moose win and the two-game sweep of the Wolves. Desrosiers finished with 40 saves for his second win of the season while Lyon took the loss and made 20 stops.

“I’m still shaking. The excitement, the joy, not only on a personal level but as a team level too. This was a really big weekend for us as a team to come in off of a long road trip against the best team in the division, and one of the best teams in the league. For us to take all four points it certainly sets us up in a good position going into a week off.”

The Moose face the Abbotsford Canucks for the first time ever on Saturday, Jan. 29. Puck drop is scheduled for 2 p.m. CT at Canada Life Centre. Extremely limited tickets are available at MooseHockey.com. You can catch the game on CJOB.com/sports, the Manitoba Moose App and AHLTV.