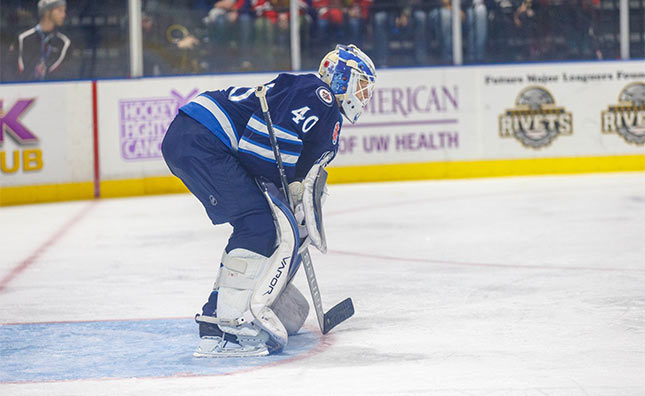 The Moose scored the first goal of the game midway through the first period with a goal from Michael Spacek assisted by Skyler McKenzie and Sami Niku. The IceHogs did not hold back offensively outshooting the Moose 14-8 in the first. Manitoba’s netminder Mikhail Berdin was dominant and kept Rockford off the board.

To start the second, Luke Green scored his first goal of the season on the power play assisted by Jansen Harkins and Cameron Schilling. 10 minutes later, the man advantage proved successful again for the Moose as C.J. Suess capitalized on a beautiful pass from Spacek giving the Moose the 3-0 advantage. The IceHogs were handed their best opportunity of the game at the end of the second period to get on the board however Berdin made a highlight reel save and denied Tyler Sikura the back of the net.

Just two minutes into the third period, Andrei Chibisov chased the puck down and found Griffith in front of the net who improved the Moose lead to 4-0. The IceHogs had five opportunities on the man advantage throughout the matchup however Manitoba’s penalty kill stayed strong throughout game. Mikhail Berdin collected his first shutout of the season collecting 41 saves in the Moose 4-0 victory.

The Moose take on the Chicago Wolves on Saturday, Nov. 9. The game will be broadcast on TSN 1290 and moosehockey.com/listenlive.