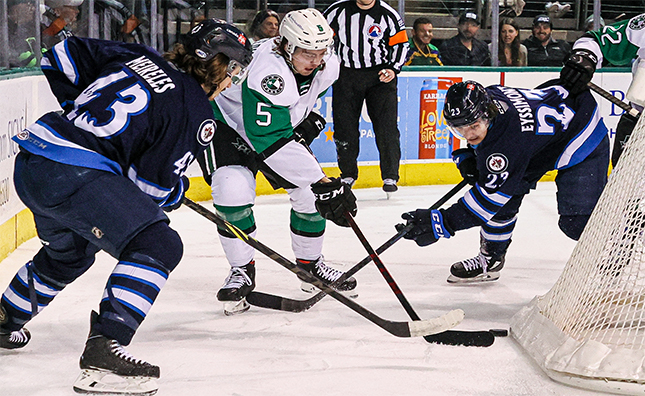 The Manitoba Moose (17-9-1-1) faced off against the Texas Stars (8-12-3-1) for a Friday night showdown at H-E-B Center. The Moose were coming off a 3-2 shootout loss against the Iowa Wild on Tuesday night.

Manitoba got the scoring started for the sixth straight contest. Luke Johnson, who was making his return from injury, set up Austin Poganski to walk in and fire a hard shot over the glove of Stars netminder Anton Khudobin for a 1-0 Moose lead. The Stars pushed as the period went on but were thwarted every time by Evan Cormier in the Moose net. The netminder’s best save was a ten-bell blocker stop late in the period to keep the Moose ahead on the scoreboard. Cormier finished the frame with 10 saves while Khudobin ended the first with five of his own.

Despite chances at either end, neither side could find twine in the middle frame. The Stars outshot the Moose 10-5 in the second period, but the spectacular play of Cormier continued as the Moose netminder made another incredible save with under a minute to go in order to keep Manitoba ahead 1-0 after 40 minutes of play.

The third period saw the Stars get the equalizer. It came in the form of a backdoor tap-in Fredrik Karlstrom 3:13 into the third. The Moose restored their lead with a between the legs backhand goal from Jeff Malott. The forward’s team-leading ninth of the season gave the Moose a 2-1 cushion. With the Moose on the penalty kill and the Stars net empty, Nicholas Jones chipped the puck out of the zone for a breakaway and found the empty net to give the Moose some breathing room and a 3-1 lead. With the Stars pressing in the final minute, Poganski corralled the puck and flung it down the ice into the open net to ice the game 4-1. Cormier was brilliant and ended the night with 34 saves and the victory, while Khudobin recorded 15 for Texas.

“I think we built off last game. There were still some opportunities that we gave up that we would like to tighten up. I think the last five minutes we did a good job of sealing that game. Corms (Cormier) has been playing amazing lately and he kept it up tonight. He really kept us in the game. I think there’s things we can clean up but I think we built on last game as well.”

The Moose rematch against the Texas Stars on Saturday, Jan. 8. Puck drop is scheduled for 7 p.m. CT. Catch the game on CJOB.com/sports, the Manitoba Moose App and AHLTV.