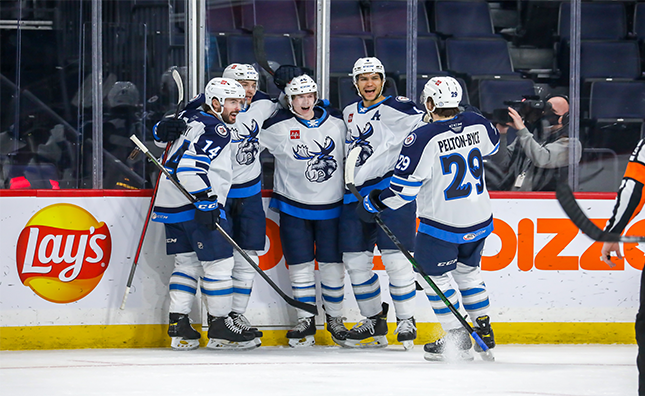 The Manitoba Moose (21-10-2-1) faced off against the Chicago Wolves (24-6-3-1) for their first of two straight at Canada Life Centre. The Moose were coming off a 4-3 loss against the Wild this past Wednesday.

The Moose opened the scoring in the first period. With Manitoba skating into the offensive zone, Ty Pelton-Byce dropped a pass for the trailing Thomas Caron. The forward wristed a hard shot over the arm of Dylan Wells for the 1-0 Moose lead just past the midway point of the period. Manitoba added to its lead two minutes later with a goal from Bobby Lynch. Haralds Egle picked the pocket of Wells behind the net and found Lynch in front for the 2-0 Moose lead. The Wolves regrouped and fired back with a tally from Andrew Poturalski, cutting the lead down to 2-1 just 44 seconds later. The Moose came right back and restored the two-goal lead with Lynch’s second tally of the period. The highlight reel goal, which saw Lynch dangle through through a Wolves defender twice, made it 3-1. Evan Cormier ended the first with 12 saves for the Moose while Wells registered 10 of his own.

The second frame saw the Wolves pull within a goal on the power play early in the period. Maxim Letunov got the final touch and bumped the score up to 3-2. That marker was all the scoring in the middle period as both Cormier and Wells were excellent the rest of the way. The horn sounded to end the frame with the Moose ahead 3-2 but trailing in shots 27-21.

The final frame saw the Wolves tie the game with a late tally. Defenceman Joey Keane threw a shot from the point through traffic on net. The puck bounced through the bodies and under the pads of Cormier for a 3-3 tie game. The contest required overtime and was ended off a gorgeous rush by Evan Polei. The forward’s fourth of the season finished the contest and propelled the Moose to a 4-3 win. Cormier ended the night with 36 saves in the extra time win

“It’s a tribute to them. They work really hard. Everyone that’s brought into the group seems to be accepted very easily. The core group that’s still there seems to bring them in and they seem to play for each other even though there’s a lot of new bodies. That’s the one thing that we have since the road trip started. We have a really good work ethic and really good chemistry and that’s half the battle. They work for each other and you can see there’s some desperation in their game where they block shots or dive at the blueline to get a puck over. They do a lot of things to try and win the two points.”

The Moose and Wolves rematch on Sunday, Jan. 23. Puck drop is scheduled for 2 p.m. CT at Canada Life Centre. Extremely limited tickets are available at MooseHockey.com. You can catch the game on CJOB.com/sports, the Manitoba Moose App and AHLTV.