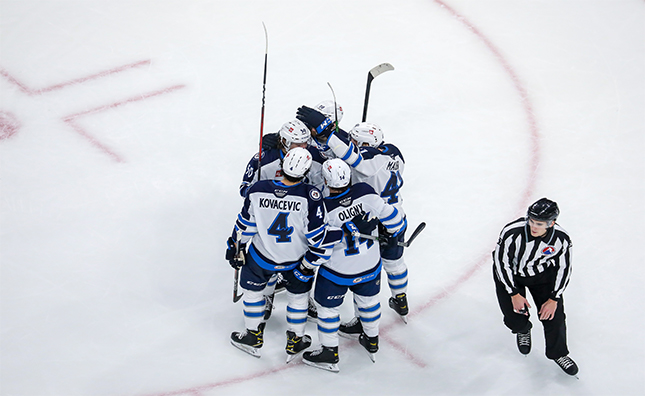 The Manitoba Moose (4-2-0-0) opened the weekend at Canada Life Centre for their first of two games against their Central Division foes, the Iowa Wild (3-2-0-0). The Moose were coming off a 3-2 shootout win on Sunday afternoon and were aiming to go on their first three-game winning streak of the season.

Iowa started the scoring 1:53 into the first with an unassisted goal from a sharp angle off the blade of defenceman Joe Hicketts. Manitoba pushed back and was rewarded with the tying goal from Thomas Caron. Greg Meireles found Evan Polei who drove wide and swung the puck across the crease with a deft backhand. Caron was waiting, dropped to a knee, and one-timed it past Andrew Hammond for the 1-1 goal at 7:28. It was the first professional goal of Caron’s career. The horn sounded with the teams tied 1-1 tie after 20 and Manitoba trailing in shots 12-10.

Manitoba continued their goal-scoring in the second frame with a tally from Cole Maier. Johnathan Kovacevic fired the disc from the blueline and Maier got a stick on it to give the Moose a 2-1 lead at 12:14. Manitoba continued to score with a goal from Leon Gawanke. Cole Maier won the faceoff to Hayden Shaw who sent the puck across to Gawanke. The defenceman fired a slapshot to the back of the net for a 3-1 Moose lead at 14:48. Iowa answered back almost a minute later as Mason Shaw beat Berdin to make it 3-2 at 15:43. Manitoba responded with a power play goal from David Gustafsson to restore the two-goal lead. Cole Perfetti and Kristian Reichel worked the passing play to perfection before feeding Gustafsson who fired it home. After 40 minutes of play, the Moose had a 4-2 lead, but trailed 24-21 in shots.

The Wild started off the third with a power play goal to draw themselves within one of the Moose. Mitchell Chaffee connected for the tally 37 seconds into the final frame. The Moose restored the two-goal lead halfway through the third with a goal from Simon Lundmark. The defenceman let fly a seeing-eye shot from the point that beat Hammond and made it 5-3 Moose at 10:50. That would be all the scoring in this affair, as the Moose downed the Wild 5-3 for their third straight win. Final shots on goal saw the Wild finish ahead by a 35-31 count.

“We play a high-speed game. Heavy on the forecheck. We aim to cycle the puck low and not cough it up at the blueline. If we do that we’re playing our game.”

The Moose end the weekend with their second straight game against the Iowa Wild on Sunday.  Puck drop is scheduled for 2:00 p.m. CT. Tickets for the game are available at MooseHockey.com/TICKETS.