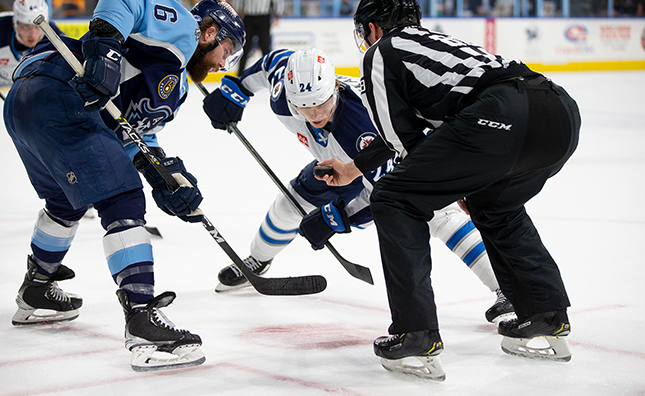 The Manitoba Moose (39-23-5-2) clashed with the Milwaukee Admirals (38-28-5-4) Sunday afternoon at UW-M Panther Arena. The Moose were coming off a 5-3 loss against Rockford the previous night.

Manitoba opened the scoring early in the first. Kristian Vesalainen put the puck out into the slot from behind the net. Leon Gawanke was waiting and fired the shot past Devin Cooley for the 1-0 lead. The Moose converted another goal before the period was five minutes old. Jimmy Oligny steered the puck on net off a shot from the point and C.J. Suess whacked home the rebound to push the Moose ahead 2-0. The horn sounded to draw the frame to a close. Evan Cormier recorded eight stops for Manitoba, while Devin Cooley finished with 11 for the home side Admirals.

Manitoba added to their lead halfway through the middle frame with another tally from Suess. With the Moose on the penalty kill, Suess grabbed the puck and made his way up ice. The forward made a pair of slick dekes before ripping a shot past Cooley for a 3-0 lead. Despite a late push from Milwaukee, the Suess goal would be the only source of offence in the second stanza. Both clubs fired eight shots on goal, with the Moose leading 21-16 overall.

Milwaukee got on the board just prior to the mid-point of the third period. Jimmy Huntington beat Cormier off a cross-ice feed and made it a 3-1 game. Milwaukee scored again just 21 seconds later, this time off the stick of Cole Schneider. That tally pulled the home side within a goal. Manitoba found some insurance on the power play with a goal from Ville Heinola with under six minutes to go. The shot from the blueline was through traffic and beat Cooley high. Manitoba added another tally just under a minute later as Evan Polei blasted one from the wing to give the antlered ones a 5-2 lead. Milwaukee pulled Cooley late to bring out the extra attacker, but David Gustafsson gathered the puck and iced the game with a late empty net goal to put the contest away. Cormier captured the victory on the back on 25 saves, while Cooley was tagged with the loss and made 25 stops of his own.

“Yesterday we didn’t play our way. We didn’t play how we wanted to play. Today we did for the most part of the game and we’re happy with this one for sure.”

The Moose return home for a contest against the Texas Stars on Tuesday, April 26. Puck drop is scheduled for 7:00 p.m. CT at Canada Life Centre.