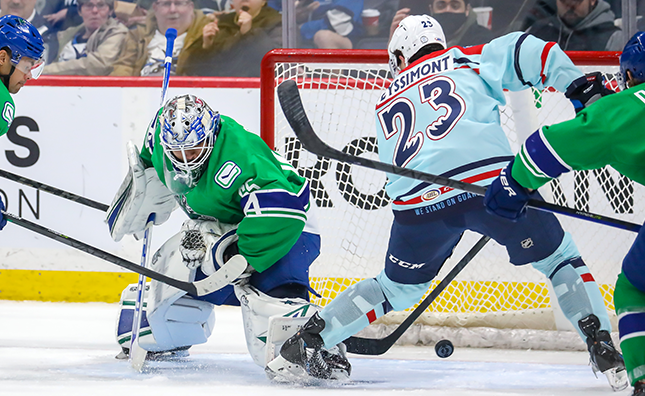 The Manitoba Moose (41-24-5-2) rematched with the Abbotsford Canucks (39-23-5-1) Saturday afternoon at Canada Life Centre. The Moose were coming off a 7-1 win over the Canucks on Thursday evening.

Manitoba opened the scoring just shy of the four-minute mark of the first frame. Nicholas Jones dug the puck free from behind the net and hit Haralds Egle with a pass in front. Egle took advantage of the time and space and picked a corner past Michael DiPietro for a 1-0 Moose lead. Manitoba added to its lead with 3:30 to go in the frame. With the Moose on the power play, Luke Johnson fired a hard shot on net. The rebound was tipped from Jeff Malott to Mikey Eyssimont who knocked it home for a 2-0 lead. Mikhail Berdin ended the frame with four saves, while DiPietro finished with 10 of his own.

Manitoba kept up the pressure in the second. Cole Maier sealed the wall and blocked a DiPietro clearing attempt. He found Jones in front who buried the puck for his second point of the afternoon and a 3-0 Manitoba lead. Three minutes later the Moose added to their lead. Ville Heinola sent the puck to Eyssimont whose hard shot beat DiPietro to give Manitoba a 4-0 lead. Later in the frame Abbotsford’s Jett Woo was awarded a penalty shot, but was turned away by the pad of Berdin to keep the score 4-0 through two periods.

Manitoba continued to push ahead late with less than six minutes left on Eyssimont’s hat-trick tally. With under three to play, the Moose found themselves on the penalty kill. Jones stripped DiPietro behind the net and batted the puck to Kristian Vesalainen who found twine to ice the game by a score of 6-0. Berdin earned the shutout on the back of 20 saves, while DiPietro was tagged with the loss and ended with 20 saves of his own.

“We’re really happy with our past two games. We were kinda struggling our few games before that, but it feels good to finally score some goals and get a good feeling before the playoffs. ”

The Central Division Semifinals begin in Milwaukee on Friday, May 6. Puck drop is scheduled for 7:00 p.m. CT at UW-M Panther Arena. You can catch the game on 680 CJOB, CJOB.com/sports, the Manitoba Moose Appand AHLTV.