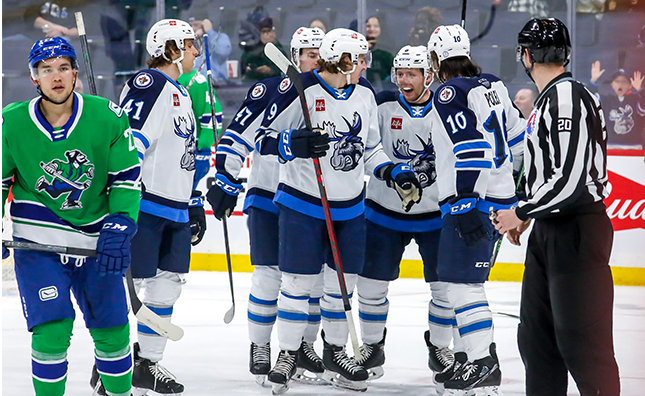 The Manitoba Moose (40-24-5-2) clashed with the Abbotsford Canucks (39-22-5-1) Thursday evening at Canada Life Centre. The Moose were coming off a 4-2 loss against Texas on Tuesday night.

Manitoba opened the scoring near the halfway point of the first period. After a sustained shift of Moose pressure, Leon Gawanke faked a shot and fed the puck to Nicholas Jones for the tap-in and a 1-0 lead. The Moose struck again a couple minutes later. Mikey Eyssimont burned into the offensive zone and flipped a backhand pass to C.J. Suess, who tapped his 13th of the season past Michael DiPietro for a 2-0 Moose lead. Manitoba kept the pressure on and was rewarded with a third tally with 22 seconds to go. Cole Maier worked the puck out front on a wraparound. Evan Polei got a stick on the disc and found twine to give the home side a 3-0 lead. The Moose outshot the Canucks 20-6 in the period.

Abbotsford got on the board in the middle frame with a goal from Brannon McManus. Manitoba responded and restored their three-goal lead. With the Moose on the power play, Ville Heinola lifted a shot through traffic that went to the back of the net and gave Manitoba a 4-1 lead. The Moose converted another tally just over a minute later as Daniel Torgersson whacked home a rebound in front to push the score to 5-1. The offence continued as Johnathan Kovacevic found Declan Chisholm who wired home his ninth of the season with less than a minute to go in the second. Manitoba carried a 6-1 lead into the second intermission and were ahead in shots 34-18.

Abbotsford began the third with a different goalie between the pipes, as Rylan Toth replaced DiPietro. The only goal of the final frame came off the stick of Suess. His second of the game and 14th of the season pushed the Moose lead ahead to 7-1. Manitoba outshot Abbotsford 12-4 in the third period as the Moose captured a dominant 7-1 victory. Berdin took the win and ended the night with 21 saves, while DiPietro finished with 27 stops and was tagged with the loss

“A big focus today was starting the right way. I think we’re a team that when we do start the right way, and everybody is playing at that high pace, high intensity, heavy forechecking game, it leads to a lot of good things for us. One of our main focuses tonight was to have a good start.”

The Moose rematch with the Abbotsford Canucks on Saturday, April 30 for their final game of the regular season. Puck drop is scheduled for 2:00 p.m. CT at Canada Life Centre. Tickets to all upcoming Moose home games are available at MooseHockey.com/TICKETS.