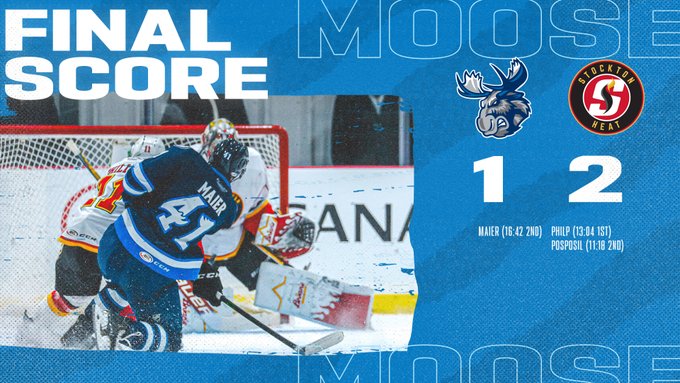 The Manitoba Moose (6-7-2-0) dropped a 2-1 contest against the Stockton Heat (8-2-0-0) on Thursday night at Bell MTS Iceplex. With 6:56 remaining in the first period, Giorgio Estephan rushed into the Moose zone and was trapped by Mantioba’s defencemen. Meanwhile, Luke Philp swooped in, collected the loose puck, and made no mistake on his target to gain a 1-0 lead for Stockton. Manitoba outshot the Heat by a 8-6 count during the first period.

With 8:42 to go in the second, Martin Pospisil capitalized on a Stockton power play opportunity and improved the Heat’s lead to 2-0. With 3:18 left in the second frame, Haralds Egle and Nicholas Jones displayed an impressive forecheck and stole the puck from a Stockton defender. Jones found Cole Maier streaking down the middle and Maier blasted a quick shot past Stockton’s netminder Garett Sparks.

Manitoba pressed Stockton during the final period of the evening in an attempt to find an equalizer. The Moose outshot the Heat by a 12-3 count however Sparks held it down and Stockton a 2-1 victory.

“There’s a lot to like from tonight and there was a lot to learn from this game. Especially in the second period and what we didn’t do right, and in the third what we did right. Comparing the two periods that’s going to be a good meeting the next time we meet with the team.”

The Moose face off against the Stockton Heat on Saturday afternoon at Bell MTS Iceplex. Puck drop is scheduled for 2 p.m. The game is available on MooseHockey.com/LISTENLIVE, CJOB.com/sports and AHLTV.com.